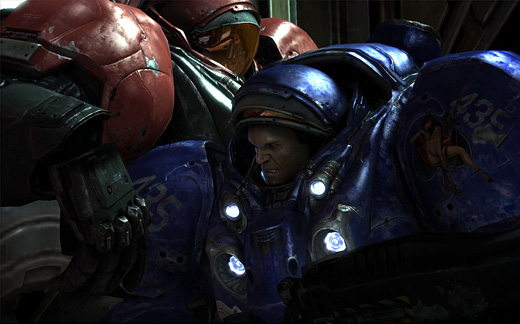 On the Wings of Love

HIGH: Swarming marines with carriers and watching them go crazy trying to shoot all the interceptors.

LOW: The cringe-inducing “happily ever after” ending.

WTF: Zeratul: “I don’t have time to explain…..so stare at this crystal for like four hours….”

StarCraft was a cultural phenomenon. Even a full twelve years after its release there are still legions of dedicated players around the world. Its impact on competitive gaming and the RTS genre cannot be understated. It was the standard bearer for the strategy games, featuring a mix of balance, atmosphere, and penchant for epic multiplayer battles that had never been seen before.

In the face of all that StarCraft accomplished, what could we as gamers possibly hope for from StarCraft II with the release of Wings of Liberty? What can it do that would alleviate the chants of “It’ll never be what the first game was” that will no doubt emanate from the gaming masses?

The answer is surprisingly simple: nothing.

StarCraft II will never be what its predecessor was in terms of impact on the genre, or impact on gaming as a whole. Blizzard, to their credit, appears to have realized this and chosen not to tinker too much with a formula that had already been proven to work so well. Is StarCraft II revolutionary? Not in the slightest. It does however, introduce many small improvements that make it a worthy successor.

A hallmark of any great multiplayer game is balance. Any advantage a particular class or race has must be offset by a corresponding disadvantage or vulnerability to another kind of player, essentially boiling down to a game of rock/paper/scissors with spaceships. This balance is especially difficult in RTSs, as the multitude of strategies and unit types available to the player results in something akin to a speed chess match where all the pieces can move anywhere they want, whenever they want. Keeping a level field among not two but three different sides was a major feat of StarCraft, and StarCraft II has kept that facet alive and strengthened it with the introduction of several new units. 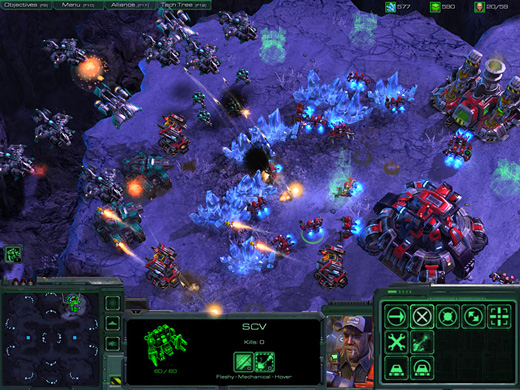 In terms of multiplayer, the new battle.net features really help the experience along. The matchmaking system works great, and I never had problems finding or hosting a game. In-game chat and friend-related functions are also improved, and getting to getting together with acquaintances to crush Very Easy Zerg took only minutes. However, network lag was a bit of a problem at times. Having to wait for a player to reconnect every now and then got pretty annoying, but the waits weren’t too long, and I never had a game simply drop me due to network problems. This is one of the reasons I lament the loss of local LAN play, as playing over the internet still isn’t quite the same as hosting a game with a group of in-person friends and trying to see if three of us can finally take down a Very Hard Zerg.

Before going on, a confession: I am bad at StarCraft. I lost every placement match I played, and routinely got mauled even in the practice matches. Don’t be fooled—getting good at StarCraft is hard. It’s like speed chess, and the ability to think quickly is key. It also requires a good amount of research beforehand and lots of practice, but the reward is there for players who seek it. Victory is hard-won, but I think the reward of watching a well-built machine obliterate my opponent (the few times I got to see it happen) is worth it.

The campaign also does a decent job of preparing the player for online play, as many of the missions required me to move quickly when setting up my base and readying my forces for combat. Time is key, so it’s good that the game encourages the player to multitask. It obviously doesn’t come close to the real thing in this regard, but it’s a start. In truth, I actually enjoyed the single-player missions more than I expected, with each mission having a distinct flavor that made it at least somewhat memorable. As the campaign pressed on, the game felt appropriately more intense, and the difficulty rose at an acceptable rate. Unfortunately, the campaign contains the one area where StarCraft II (or at least Wings of Liberty) truly fails: the story.

I realize that a poor narrative is an odd thing to criticize an RTS for, but the story of the original StarCraft was something that impressed me. The game universe felt massive, and the lore surrounding it painted an intricate backdrop for the events to come. Most other RTSs of the time had plots that were little more than pieces of yarn stringing the missions together, but StarCraft’s featured struggle, duplicity, tragedy, and other dramatic terms. The modern sci-fi setting was built to a tee with a race of psychic aliens, a monolithic threat to all life in existence (complete with a tragic villain), and lots of cool technology. This world lent itself extremely well to the StarCraft experience, withthe battles actually feeling like part of an epic struggle against annihilation. The scope of the story matched the scope of the game itself. 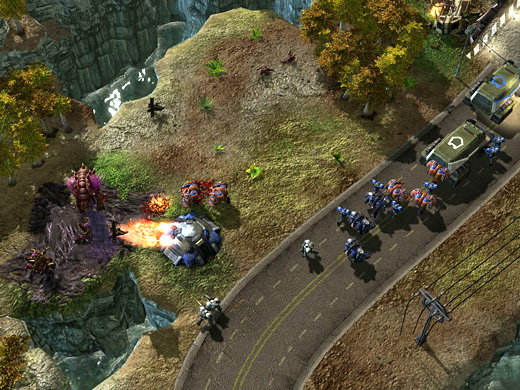 By comparison, I was disappointed to see Wings of Liberty’s story devolve into an awkward space western with far too many meandering subplots and a cheap “save the girl” arc thrown in. There are a lot of head-scratching plot points and a particularly curious retcon of something established from the first game. Then there was the ending….I like to keep my reviews as spoiler-free as possible, so I won’t mention specifics. However, I will say I was feeling a Star Wars prequel-level of betrayal when the credits started to roll. It takes a special kind of failure to screw up a character like Darth Vader, and it takes a similar type of failure to screw up Sarah Kerrigan. There are of course the other two campaigns still to be released, so it’s entirely possible Blizzard might redeem themselves in this department. However, this story with this ending in particular felt very hollow.

I’m also disappointed that Blizzard has chosen to distribute only one of the campaigns with this release. While the game does contain roughly the same amount of missions, nearly all of them are Terran-based, with a Protoss mini-campaign thrown in. This differs from the structure of the first game, which had ten missions for each race.

I think 30-40 single player missions is enough to tell the entire story of StarCraft II, and smaller segments dedicated to each race would have helped prevent the story from wandering in so many directions. Even though I did enjoy the missions themselves, I found myself wanting to play as the other two races after about half the campaign. I’m not at all opposed to the idea of having expansions later on—more of a good thing is always welcome. However, I don’t feel that the main story or the single-player campaign was best served by being split up.

My qualms with the writing aside, the way the story is presented is actually pretty well done. The RTS genre isn’t the most conducive to good storytelling, and the original StarCraft broke the mold in this regard. Now instead of watching almost everything unfold through video screens, I can interact with the rest of the cast in a Wing Commander-type setting by visiting different parts of the ship. This is also the way to get unit upgrades and some new items, so weaving in some minor plot development into these instances works very smoothly. It’s a shame that the writing doesn’t live up to the presentation.

StarCraft II is not ground-breaking. It will not have the same lasting impact on gaming that its predecessor did. There’s no way it ever could. It will, however, be remembered as a worthy sequel to one of the all-time greats. It’s just a shame that (at least for now) it’s missed the mark so badly on its narrative. Rating: 8.0 out of 10.

Disclosures: This game was obtained via publisher and reviewed on the PC. Approximately 30 hours of play was devoted to completing the single-player campaign on Normal difficulty and 5 hours of play in multiplayer modes.

Parents: According to the ESRB, this game contains violence, suggestive themes, crude humor. I’d say a T rating is appropriate here. Keep the small ones away.

Deaf & Hard of Hearing: All spoken lines are subtitled, and there are concurrent visual cues to accompany audio cues.

Born and raised in St. Louis, MO, Richard received his first console (the NES) at the age of six, and from that point on games have been an integral part of his life, whether it’s been frittering summers away with the likes of Mario, Mega Man, and the Zerg or partaking in marathon sessions of Halo, Team Fortress 2 or Left 4 Dead. After being a longtime reader of GameCritics, Richard joined the staff in March of 2009, and over the years Richard grew into the more prominent role of part-time podcast host.

In 2016, he spearheaded a complete rebuild of the GameCritics.com website, earning him the title of Chief Engineer.

His gaming interests are fairly eclectic, ranging from 2D platformers to old-school-style adventure games to RPGs to first-person shooters. So in other words, he’ll play pretty much anything.

Everything we know about Vampire: The Masquerade—Bloodlines 2