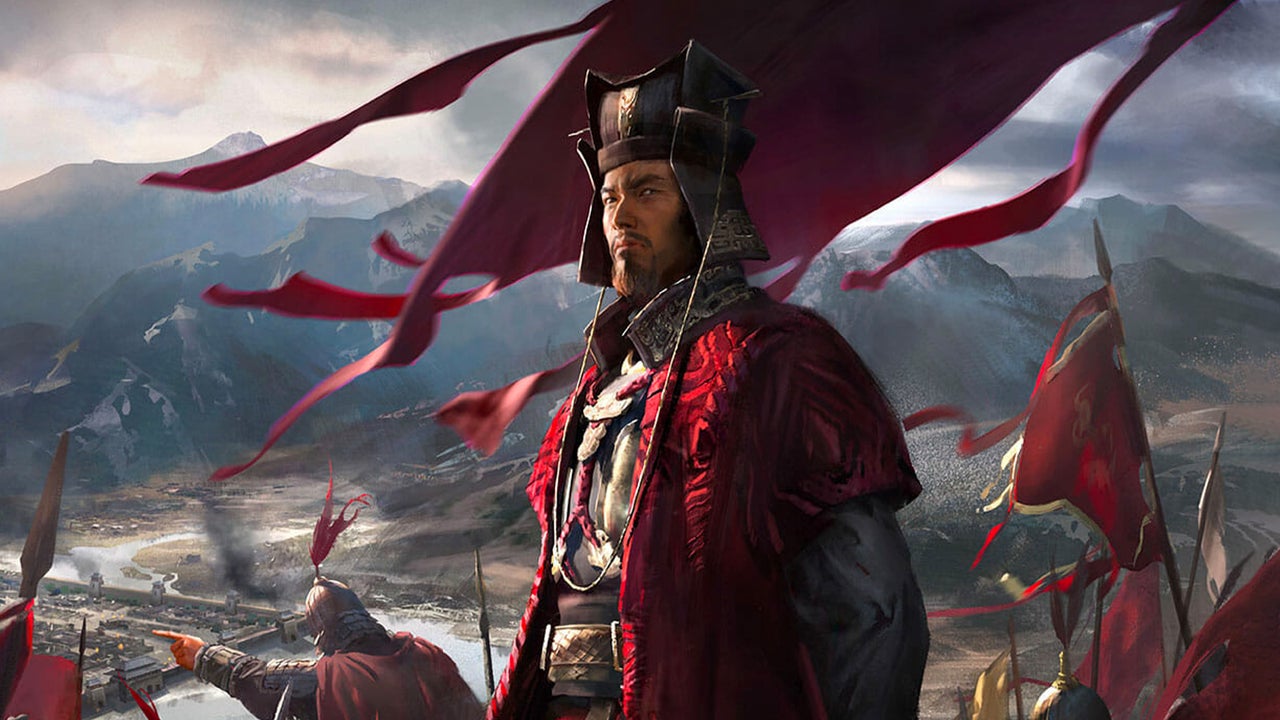 A turn-based grand strategy game on the scale of Total War: Three Kingdoms often struggles to present a consistent and meaningful challenge across hundreds of turns and dozens of battles. With this foray into ancient China, however, Creative Assembly seems to have finally hit an elusive sweet spot with its campaign tuning. A political and tactical landscape that’s almost never boring, filled out with gorgeous, stylized graphics, an excellent character system, and massive performance improvements over previous games in the series leave no doubt who the new emperor is around these parts.

Three Kingdoms offers you two ways to conquer its sprawling, attractively exaggerated map of 200s CE China. Records mode is closer to classic historical Total War, where generals are mere mortals accompanied into battle by a bodyguard regiment, and real-time engagements play out slowly and less decisively. It also led me to feel like I might as well be playing any other historical Total War game, though. That’s not a deal-breaker given how many other things are fresh and exciting on the campaign map, but I was never all that tempted to give it much of my time when the other option is so much cooler. The campaign really comes alive in Romance mode, which is based on the semi-historical novel about the era, The Romance of the Three Kingdoms. This turns your generals into demigod-like kung fu action heroes who engage in dramatic duels and can take on hundreds of normal soldiers single-handedly. Both modes put a strong emphasis on the larger-than-life characters driving the action, including quippy banter both before and during battle that helps bring them to life. But some of the fun and character is definitely lost if you’re sticking closer to the history books in Records mode.The campaign really comes alive in Romance mode.

Spotlighting named characters helps make up for the fact that the armies themselves aren’t quite as diverse or interesting as, say, the Warhammer Total Wars’ or even Thrones of Britannia’s. We’re back in the land of swordsmen, spearmen, archers, and cavalry in various configurations maneuvering to best exploit the rock-paper-scissors relationships between different troops. And there aren’t competing ethnic groups to shake things up on the level of Huns vs Romans in Attila since all the action takes place between factions that are decidedly Chinese. Diversity in army composition is encouraged in other ways, however, as troops are recruited to a specific character’s retinue and armies are made up of one to three of them. Also, each general has a class, so you’ll want to compose forces around complementary generals with regiments that take the best advantage of their bonuses.

Total War: Three Kingdoms adds a clever layer of personality and tactical consideration with its five hero classes. Since you can only include three heroes in any army, you won’t have access to every possible utility in any given one. Here’s what they’re each good at:

Vanguard: Breaking enemy lines. These heroes are the best against normal, everyday troops and have a strong offensive focus. They can also recruit higher-tier shock cavalry and give combat bonuses to shock cavalry. You want to throw them at the weakest part of the enemy line and watch the sparks fly.

Champion: Dueling. These are the heroes that kill other heroes. They’re not as good in a chaotic melee as Vanguards, but are peerless in one-on-one combat. They also allow you to recruit higher-tier spearmen and give combat bonuses to spearmen. You want to sick them on the enemy’s most important generals right away.

Sentinel: Hold the line! These guys can plant their feet and take a charge, outlasting any other hero type in a protracted brawl. They unlock high-tier swordsman for recruitment and give combat bonuses to all swordsmen. You want to set them up in a spot where you need the line to hold, come hell or Lu Bu.

Commander: Inspiration. No one can rally the troops better than a commander. In addition, they unlock some of the best melee cavalry available and give combat bonuses to melee cavalry. Use their mobility to move them around the field and provide encouragement to any regiments you may see on the verge of fleeing.

Strategist: The right push at the right time. The combat buffs available to these heroes are usually very situational, but very powerful if deployed for maximum effect. They’ll also bring the best archers to the field and pair particularly well with any unit wielding ranged weaponry. Use them wisely and they may be the point on which the whole battle turns.

Each faction also gets a set of unique mechanics and some even feature a unique currency. The best of these, of the warlords I played, is the scheming Cao Cao who can spend his unique Credibility resource to improve or worsen relations between any two factions. If you get them to hate each other enough you can even instigate a proxy war to soften them up for when you eventually swoop in to devour both their battered corpses, or force someone you’re already fighting to divert resources elsewhere.

Why Can’t We Be Friends?

Staffing your armies isn’t always just a matter of picking the statistically best officer for the job because characters can develop friendships and rivalries over time, which adds an interesting wrinkle into organizing your forces. Two hotshot generals who hate each other might resent being placed in the same army, just as those who are fighting beside their sworn brothers will perform better. And that’s before you even get into deeper political considerations, like the all-star Champion you just hired deciding he wants a more prestigious political office and threatening to abandon your faction if you don’t give it to him. I’M LOOKING AT YOU, LU BU!Far better than any previous Total War game, Three Kingdoms lays on diplomatic and military pressure early.

Whoever ends up leading your armies, they’re in for quite a challenge. Far better than any previous Total War game, Three Kingdoms lays on diplomatic and military pressure early and somehow manages to maintain it even many dozens of turns into a successful campaign. The open geography of China is at least partly to thank for this, but the aggressiveness of the AI and the way armies are trained and deployed play a role as well. I’ve always been bored to tears by that traditional late game Total War slog of sending a few godlike stacks of elite troops around the map to mop up all resistance with auto-resolve battle after auto-resolve battle. But even on the default difficulty, Three Kingdoms offered me tense, fairly balanced, exciting battles throughout. The one drawback is that it got a little bit exhausting after a certain point. It’s a great change overall, but it might have swung things just a tad too far in the other direction now. I wouldn’t mind being able to effortlessly crush a stubborn enemy on their last legs every once in a while, just as a reward for fighting my heart out for so long.

There Can Be Only Three

One of the cleverest ways the campaign maintains this pressure is by having all of the minor warlords coalesce into the titular Three Kingdoms in the late game. Once you become powerful enough to stake a claim on the Imperial throne, your two most dangerous remaining rivals will do the same and morph the field from a chaotic free-for-all to a three-way Mexican standoff from which only one ruler can emerge victorious. It provides the same great escalation in tension as the Realm Divide mechanic from Total War Shogun 2, but without arbitrarily handing half of your hard-won provinces to rebels.

Every IGN Total War Review Ever

Not all of the new campaign mechanics are so flashy and impactful, though. There’s a whole system of ministries, governorships, and assignments you can slot characters into that grant bonuses to your faction, but I found that I mostly forgot they existed most of the time. Their greatest benefit seems to come from giving a discontented character a fancy title so they don’t ragequit and go join another warlord. The bonuses are nice, but most of them come simply from having any given butt in the right chair. Bonuses from individual characters’ butts are relatively meager and ignorable. Assignments in particular, which are meant to give your characters who aren’t actively governing or leading an army something to do, could have completely disappeared and I probably wouldn’t have noticed. There’s no notification for when assignment slots are available, so unless I made a point of checking their menu every turn I really only used them if there was a crisis, like a food shortage, and I needed a way to shore it up quickly.Three Kingdoms runs like an absolute dream.

The gold dragon ornament on top of all of this is that Three Kingdoms runs like an absolute dream. Every Total War game since 2013’s Rome 2 has had significant performance issues, even on high-end hardware. But much to my surprise, both the campaign map and the battles glided along like a crane on the wind without even making my GeForce GTX 1070 and i7-4770K break a sweat – even on Ultra settings. As a baseline, I was getting almost 50% higher framerates on the battle map than the recent Thrones of Britannia. I still saw some slowdowns in absolutely titanic clashes involving multiple full-sized armies beefing apocalyptically over a massive, fortified city, but not to the same degree that I’m used to with this series.

The Last Of Us Part II Review – A Perfect Circle