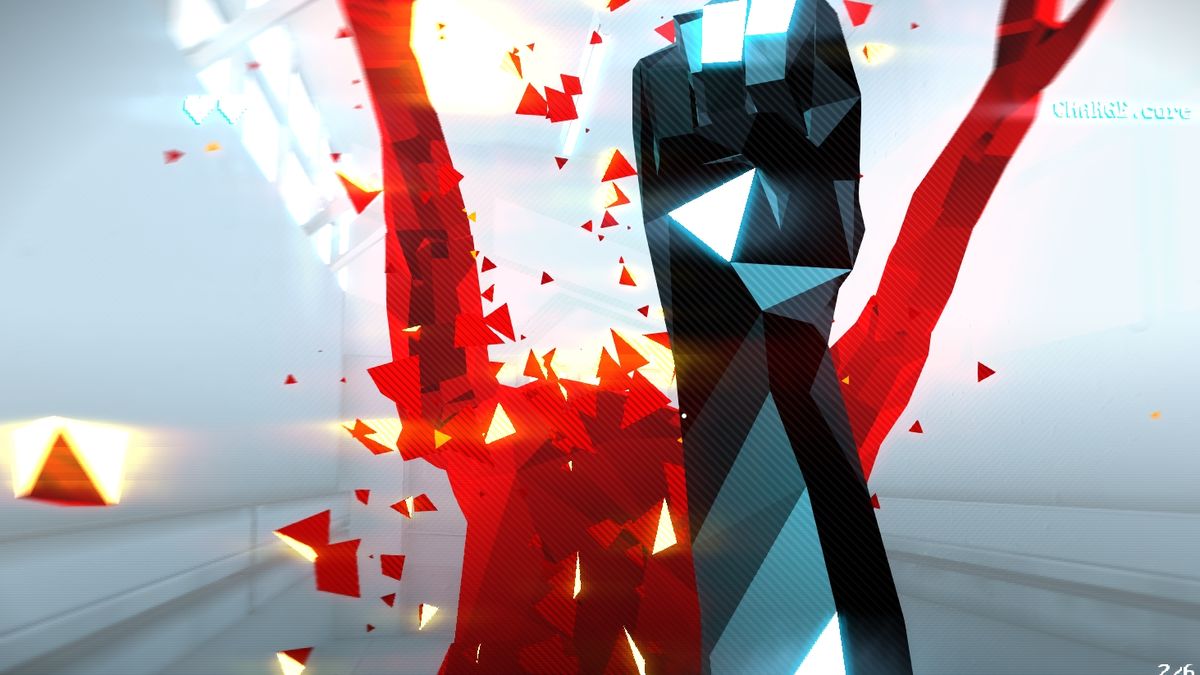 Get hit by a stray shot: dead. Repeat. Run out of bullets: dead. Repeat. Take a gun to the back of your head: dead. Repeat. Each death in Superhot expansion Mind Control Delete resets the board and generates a fresh gauntlet of slow-motion, first-person gunfights to brawl through.

Standalone expansion Mind Control Delete replaces Superhot’s fast-paced action flick format with a series of practically endless, procedurally-generated temporal skirmishes. The expansion fancies itself as something of a roguelike, but the same combat rules apply: stop moving, and time will freeze to a near-standstill. The moment you start looking around, interacting with the world or (heaven forbid) sprinting all over the shop, time speeds up to match your velocity.

The system still generates frenetic action scenes. I start, for instance, by smashing a fish tank to hurl sea life at the first foe. Before the first cod has slapped its mark, I’m leaning over a sofa to pick up a shotgun, filling a swordsman’s gut with buckshot before spinning to beat down a pipe-welding ambusher. Impossible in real-time; graceful in slow motion.

Mind Control Delete has plenty of mood-setting to get through first, but when the expansion finally plays its hand hand it confronts you with a sprawling map of challenges nodes, upgrades, and occasional lore dumps. Each node gives you a handful of brawls to fight your way out of. Get to the end, and you can push on to the next one.

To accommodate this gauntlet, the devs have made a few changes to the Superhot formula. Rather than going down in one hit, you’ve now got a pool of three hearts to see you through each run (with the occasional mid-run reprieve to recharge or upgrade your health tally). That does mean you want to pick health bonuses over any of the other Hacks the game offers up, mind, though the others can be quite tempting. Hacks can grant you anything from faster movement speed to a guaranteed gun or katana at the start of each fight.

You find fancier Hacks as you dig through the map. Some let your shots pierce enemies, or give you the power to deflect every bullet in the arena at once. Each comes with a brief tutorial map when acquired, giving you a chance to experiment before you pick one mid-run. Longer missions let you earn Cores—fundamental traits that you apply at the very start of a run. The first Core mission tasks you with a three map prison break. Succeed and you can take a leaping charge ability into the rest of the game.

To keep things fair, Mind Control Delete starts remixing how its baddies work. They still run and gun blindly at you as before, but you soon encounter foes who’s weapons can’t be stolen, and porcelain gits who can only be damaged by hitting their glowing red weak point.

Superhot’s glitched-out story about control, conspiracies and illegal ROMs returns, providing a narrative structure that keeps MCD from going full Spelunky. You’re always diving deeper into the machine, whether that’s to dig out more cryptic text or another handy upgrade. The text sections create a haunting atmosphere, even if they are thin on actual plot, but the desire to see more kept me going even as the repetition set in.

See, Mind Control Delete can be bloody repetitive. The absolute minimalism of the visuals helps the arenas melt into the background, and all those traits and twists help spice up individual skirmishes, but you are very much still fighting the same assortment of blokes on the same round of maps. Outside of those small Hack and Core tutorials, you’re also missing the original’s more deliberate fights.

There’s no punching your way out of a packed elevator here. Every fight, by necessity, is a moderately-sized brawl in a fairly-spacious arena where foes come from all directions. Superhot’s campaign was short enough that you never spent too long in one place, either. But after an hour of Mind Control Delete, I’d seen the same dojos, garages and penthouse suites ten times over. You also miss those tasty snippets of scene-setting from the original. There’s no deal gone wrong, the bartender isn’t reaching for his gun. Each fight begins and ends without context, cutting to the next one at a seemingly arbitrary kill count.

But if you finished Superhot wanting more, Mind Control Delete offers just that. It’s great for popping in and out of a handful of brawls during a lunch break, knowing that each gauntlet survived ensures more tools and more challenges for the next day’s run.

Mind Control Delete is a great chance to jump back into Superhot with fresh eyes, to relearn the game’s rhythm’s and untangle a fresh new web of fake internet conspiracies. If you’re not up for the job, though… well, there will always be another mind willing to take control.