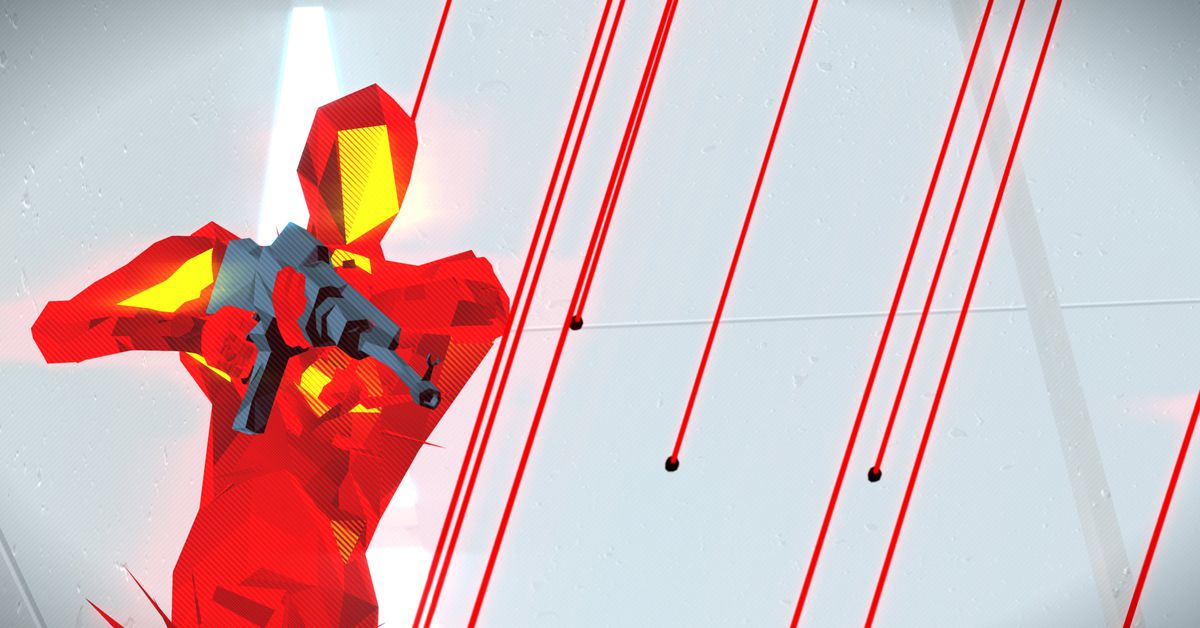 I always wonder what the enemies see when I play Superhot.

From their point of view I must be moving at about the same speed as they do, except during successful runs they must think I always know exactly what to do to get around their defenses, as if I can see a few seconds into the future. Their bullets slide around me. I play with them.

I can’t see the future, of course, but I can stop time. In Superhot, time only moves forward whenever I move, which means that I can always stand still and give myself some time to take in the scene. That faceless red goon will continue moving to the left, and in my standstill, I can tell he is about to fire at where I am right now. I better move out of the way, and also if I slide to the right, I can punch the other enemy so hard that they shatter, take their handgun, and begin to fight back.

It’s not about knowing what the enemies are thinking, it’s about extrapolating their movements and attacks a few seconds into the future, and then making sure I’m not there when the bullets arrive.

Superhot: Mind Control Delete, a standalone expansion of the original 2013 game, is a strange beast. It’s been in early access since 2017 and recently had its official release, but the final version only somewhat feels like a new game. I recently had a chance to chat with a few members of the Superhot team, and the thought process behind Mind Control Delete was fairly straightforward: They wanted to create a game you could play for hours and hours, instead of the linear, more authored experiences of past Superhot games.

Since the team didn’t have the bandwidth to make hundreds of levels, they instead built a variety of environments with interchangeable elements, from placement of different elements within that themed space, to the number and timing of your enemies, to weapons and the placement of the player in the level.

This trade-off may be controversial for fans of the series

Each level is no longer a carefully authored, planned experience, but instead a procedurally generated environment based on a series of themes. You’ll often be fighting in something that looks like a club, for example, but the layout of that club is going to vary in multiple ways.

This also means that levels no longer only spawn enemies where the player can see them, meaning that in Mind Control Delete, there will be times when a random henchman shoots you in the back, possibly before you can even tell they’re there. The doors found in each level can also spawn enemies, much like the fabled monster closets of Doom 3.

This trade-off may be controversial for fans of the series. You now have three hearts that act as your health, and each node on the overworld map is made up of a series of levels that all must be survived if you want to move ahead. There are also new powers to unlock throughout the game, such as the ability to turn throwable objects into explosives or an upgrade that gives each gun more rounds.

Each node, with its multiple levels, allows you to equip a few of these abilities, giving you a choice of two from the pool of unlocked powers. So sometimes you might take damage and feel like there was little you could have done about it, but with sly use of your abilities and a clear head, you can certainly decrease the odds of that happening.

But, to be clear, they are odds. There were a few times where I felt like I did everything right and burnt through my hearts anyway. This only sends you back to the beginning of that particular node, not the entire game. Once I began to understand how to maximize my chances at survival through each run, I began to believe Captain Picard’s immortal words on the subject: “It is possible to commit no mistakes and still lose. That is not a weakness. That is life.”

Superhot: Mind Control Delete is an uncomfortable release in some ways, having been born out of what was supposed to be DLC for the first game, given away to anyone who already owned the original game on PC, and currently being offered as a standalone game or as a bundle with one or both of the other Superhot games at a deep discount. If I were put in charge of the game’s pricing, I would likely quit and try to find an easier job.

Still, being able to stop time by standing still remains fun, and now there are so many more changing conditions that force me to adapt my strategy from one moment to the next, allowing the game to keep my attention even when the levels begin to feel familiar. Getting a lucky choice of upgrades near the end of a run is always a thrill.

I’m not sure what comes next, or if the Superhot team has squeezed the last drop of blood from the franchise, but Mind Control Delete is a fascinating remix of the concepts that made the first two games so influential.

Superhot: Mind Control Delete is out now on PC, PlayStation 4, and Xbox One. The game was reviewed on the PC using a download code provided by the Superhot Team. Vox Media has affiliate partnerships. These do not influence editorial content, though Vox Media may earn commissions for products purchased via affiliate links. You can find additional information about Polygon’s ethics policy here.

‘Final Fantasy VII Remake’ Review: More Of A Rebuild Than A Remake