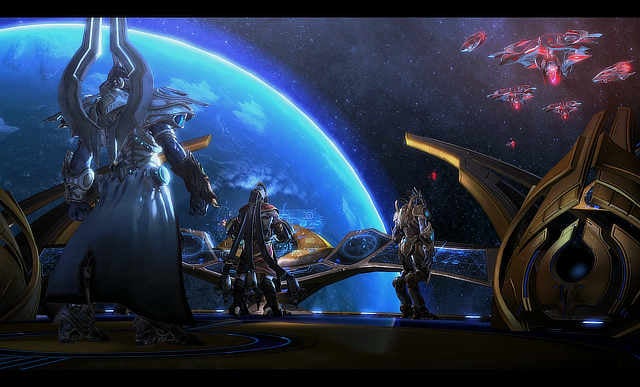 Available on PC, Mac
Is StarCraft still relevant? Should we even care about StarCraft 2 any more? I started playing Legacy of the Void feeling not quite sure. StarCraft II remains a big deal in e-Sports, but look at the most eagerly awaited releases of this month and you’d hear a lot about Fallout 4, Star Wars: Battlefront or Call of Duty: Black Ops 3, and not so much about Blizzard’s latest effort. Even online, the big MOBAs have stolen much of StarCraft’s thunder, while the RTS genre as a whole has lost its lustre.

A few days later, any doubts have pretty much evaporated. Yes, StarCraft is still relevant. Yes, we should care. Legacy of the Void is both a fitting end to the StarCraft 2 saga and Blizzard’s best effort yet at remodelling its stellar RTS game for a modern gaming world. It’s a fantastic package. 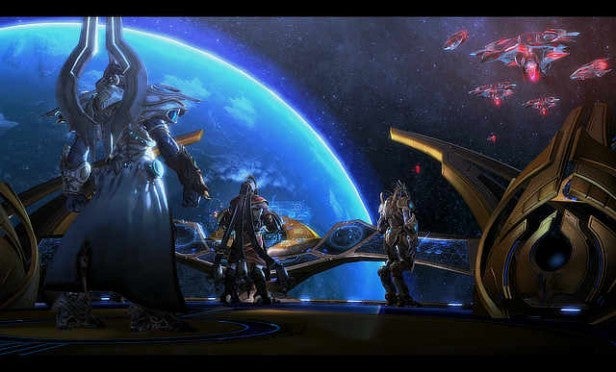 As you might recall, Blizzard made the decision with StarCraft 2 to split the sequel up. First we were due to get one main game with two meaty expansion packs, but over the years this has transformed into three separate but closely linked titles, bound by a common, continuously evolving multiplayer experience.

2010’s Wings of Liberty gave us a tale of Terran revolution, mingled with dark revelations about the fate of the Zerg and Protoss races. 2013’s Heart of the Swarm focused on the Zerg, continuing the story with the Kerrigan, the Queen of Blades, at the centre. Now Legacy of the Void gives the Protoss their hour, with the spotlight on Artanis, Hierarch and great hope of the Protoss race. The action begins with the longed-for return to the Protoss homeworld, Aiur, but Legacy rapidly transforms into the story of a last-ditch battle against a darkness that threatens to envelop the entire StarCraft universe. Involving all of StarCraft’s heroes and a good percentage of the supporting cast, StartCraft just doesn’t get any bigger than this. 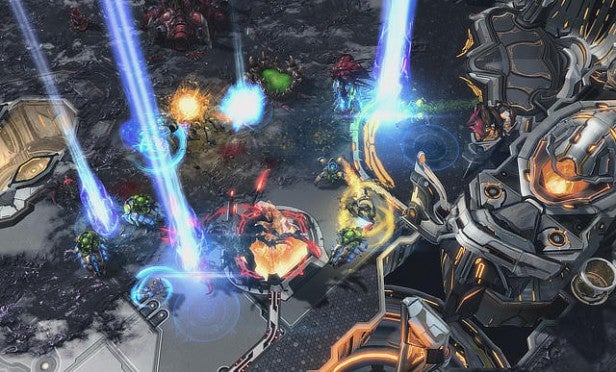 It’s hardly Shakespeare, but you have to love the way Blizzard makes character and story such a focal point of what all too often feels like the driest of game genres. We get the expected lavish cut-scenes, but each mission comes punctuated with asides, plot updates, cinematics and snippets of dialogue, designed to remind you that big things are at stake and push you to invest in the outcome.

Beyond the prologue, you also adopt a new capital ship base, The Spear of Adun. Here you can review possible missions and enhance your battle forces, but it’s also where you can talk to and gain advise from your closest comrades. The score makes it feel like the RTS equivalent of Halo, and in a sense Bungie and 343 Industries’ work on that series is a more fitting point of comparison for Blizzard’s work on world-building than any other RTS. The result in Legacy of the Void, as in Heart of the Swarm and Wings of Liberty before it, is to make you forget that you’re playing a game about dozens of disposable tiny figures battling, and make you care about the characters and their struggles. Blizzard still does this stuff better than just about anyone else.

Related: PS4 vs Xbox One 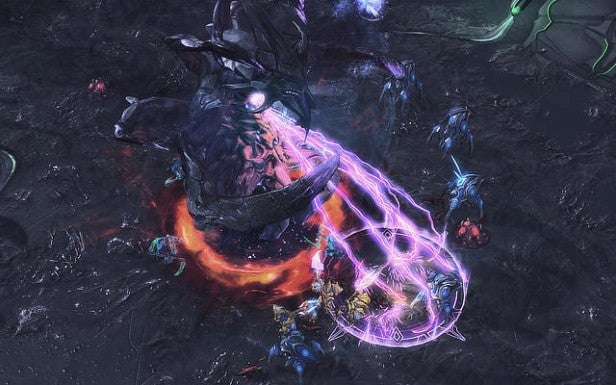 Some would argue that the Protoss have always been the most challenging and least accessible race of the three StarCraft factions, less straightforward and adaptable than the Terrans, with their space marines and powerful vehicles, but lacking the lovable, destructive hooligan mentality of the Zerg. If so, Legacy of the Void helps bring them down to earth and within easy reach. The campaign is carefully structured to drip-feed in new unit types then specific units as it progresses, giving you a chance to get to grips with the Protoss build order and key Protoss abilities and strategies early on. It makes playing Protoss feel like fun.

It’s also a varied and superbly-paced campaign, following relatively small-scale crawl and capture missions with big defensive missions, missions with timed objectives or missions where the conditions transform at specific times. There’s a great one where you’re fighting alongside Terran forces battling raiders and evil Protoss/Zerg hybrid demons, where all human forces are periodically frozen, giving you the choice of defending them against rampaging hybrids or pressing home your advantage against the raiders – it’s enthralling stuff. Of course there are missions that come down to little more than build your base, defend your base, grow your army, smash the other guy, but even these come with twists or secondary objectives that make them feel exciting. 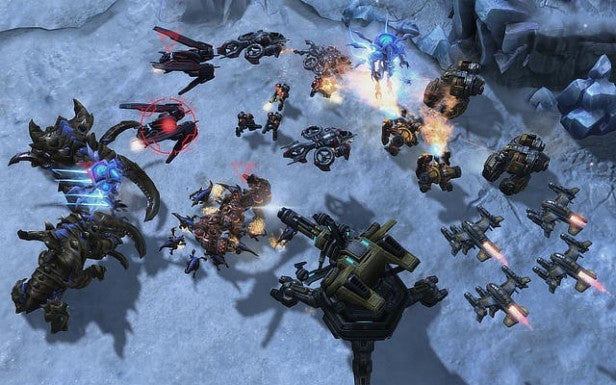 It also helps that the Protoss have some formidable and hugely compelling units, while the new enemy units – particularly the gruesome zerg/protoss hybrids – are some of the most fearsome and challenging found in StarCraft yet. Sure, there’s always a temptation to roll out the Stalkers and Immortals or send squadrons of Void rays in to smash enemy facilities, but some of the most enjoyable missions let you sneak around with teams of Dark Templars or make the most of warping capabilities. There’s a sense that the individual capabilities of units really matter.

Legacy of the Void also goes further in allowing you to customise your army. Using the facilities of the Spear of Adun you can upgrade the ship’s own attacks, giving you more powerful aerial bombardments, rapid builds or perks. Doing so requires a new resource, solarite, earned by completing secondary objectives, giving you more reason to polish off those. Beyond this, each troop type has two or more variations, corresponding to different Protoss sects. Each covers roughly the same role, but with differing abilities that support subtly different strategies. There’s a huge amount of depth and detail to get stuck into if that’s your thing. 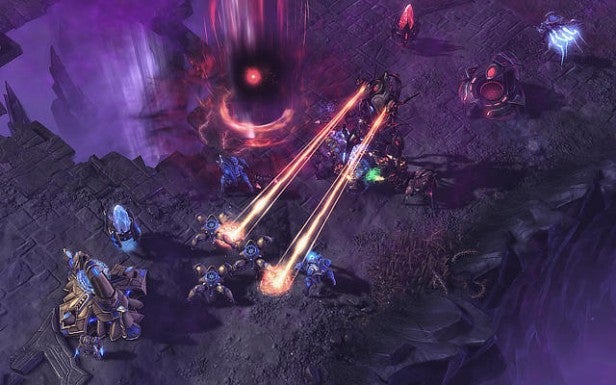 You’ll need to field a wider range of troops as well, because between the established Zerg and Terran forces you’ll also be tackling corrupted Protoss units and hybrids, often in tricky combinations. This is one of the joys of playing Legacy of the Void: it pushes out of your tactical comfort zone and makes you think. On the downside, this results in a lot of saving and reloading as you try to work out where you’re going wrong – not helped by occasional dumb pathfinding and a handful of evil difficulty spikes. Yet I’d rather have this than a campaign by the numbers. Here you’re always excited as to what might be coming next.

As for multiplayer, Blizzard hasn’t fiddled (or anything else) with a successful formula, but it has continued the good work of Heart of the Swarm in making what can be a forbidding, hardcore RTS accessible to the widest possible audience. You can work your way up through the tutorials into human vs AI matches, and from there into player vs player games where the game uses its analysis of your skill level to match you with an equally rubbish/mediocre/brilliant opponent. There’s a new Archon mode which pits two players against a single foe, with the players working together to build, manage resources and control the troops. It’s a good way for a more experienced player to mentor a noob friend, but it also helps if you find the speed and reaction times of online StarCraft overwhelming. One of you can focus on base building and defence while the other handles exploration and offence. 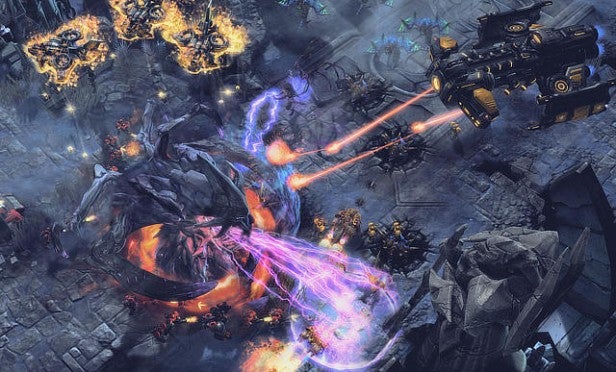 Best of all, though, is the new co-op mode, where two players can work together, playing different factions, to complete campaign-style missions on campaign-style maps. It’s a new way to play StarCraft but an absolute winner, tying into the same levelling and progression systems as the competitive online game. I suspect it’s best played with a friend using chat, so that you can steer each other towards objectives and avoid getting sulky when your comrade blows the mission, but even played with strangers, as I did, it’s a more affable way to approach online StarCraft, and a great way to see how other players do it outside of the crucible of the competitive game.

Some might suggest that StarCraft 2 is a relic of PC gaming’s past. Like other Blizzard games it hasn’t embraced the quest for photorealism, though the design and animated detail in every unit, every map and every structure is a wonder to behold. Legacy of the Void isn’t pushing up the scale, taking on innovative new control schemes or rewriting the StarCraft rulebook; it’s about update, not upheaval. 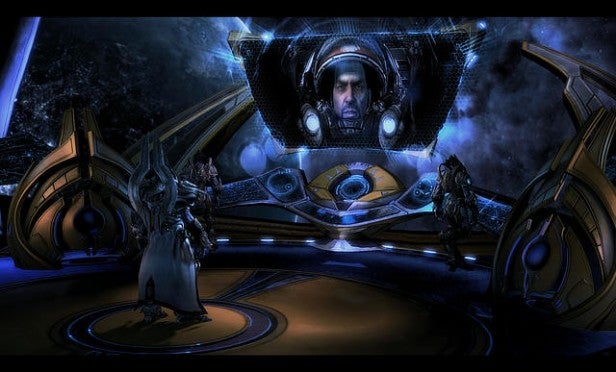 Yet if this is the last we see of StarCraft as we know it, bar the recently-announced DLC, that would be a crying shame. Legacy of the Void is a shining example of everything that’s great about StarCraft, about Blizzard, and about the RTS in general. And while little about it would make sense if you haven’t played the first two chapters, there’s never been a better time to jump onboard. You can pick up the first two games separately or in the StarCraft 2 Battle Chest for under £20.

Verdict
A cracking climax to the StarCraft 2 saga, Legacy of the Void combines the best ever StarCraft multiplayer experience with what’s arguably the strongest of the three campaigns. If you played and loved Wings of Liberty and Heart of the Storm then you’ve probably bought this already and loving every minute. If you haven’t, Legacy of the Void gives you all the more reason to give StarCraft 2 a try.

Company of Heroes: Tales of Valor