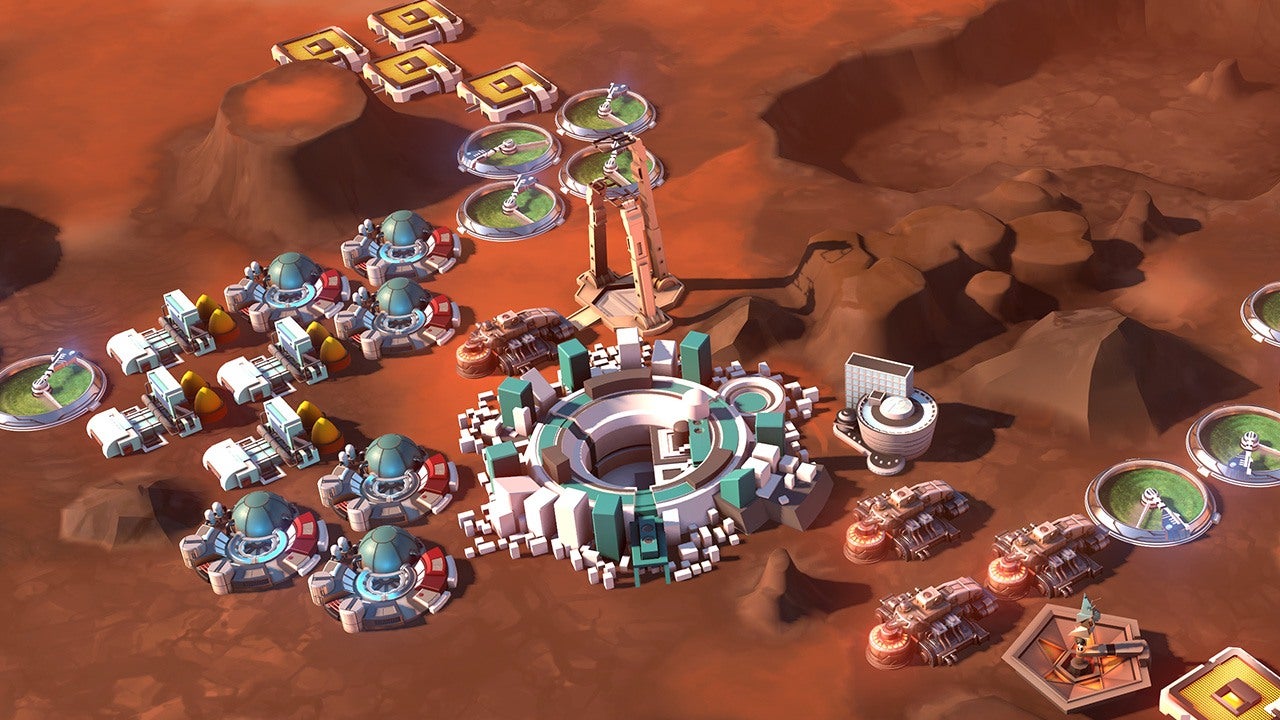 No one said extraterrestrial capitalism would be a cakewalk, and lo and behold, it’s a cutthroat business. Offworld Trading Company’s

exploitation of Mars’ natural resources is mechanically simple (relative to other economic simulations, at least) but its fast real-time strategy pacing and dog-eat-dog mind games give it a competitive edge.The supply-chain systems at the heart of Offworld are quite conventional – its randomly generated hex-based maps have just six elements to harvest, and the most complex recipe requires just four ingredients to generate high-end goods like electronics or chemicals. Its rate-based, supply-and-demand economy is just as basic, with nothing unorthodox to distinguish it.You can sell off an opponent’s stolen power for a profit.

What gives Offworld its depth is how you compete with up to seven other corporations using a randomized set of Black Market attacks and buffs. If you can identify where your opponents’ supply chains are weakest, you can send their entire economy into a tailspin by temporarily crippling key production facilities with purchased attacks. Watching an opponent’s debt skyrocket and their share price plummet after you shut off their power with an EMP and force them to buy it from the market is a satisfying reward for a job well done; alternatively, using a Hacking Array building to artificially inflate the price of power beforehand, then inciting a mutiny in the enemy’s power plant to divert its flow to your supply will both maximize the damage to their ledger and pour cash into your account as you sell off their power for a profit. That’s even better.Pulling off elaborate industrial sabotage like this takes some keen observation of how the rival company is set up. That’s easy to do if you’re playing in single-player against the competent AI opponents and can pause to examine them at your leisure, but much tougher (and thus more rewarding) in a live multiplayer game where you have to split your attention between observation and managing your own company.

You can hire pirates from the Black Market to steal resources for you.

To keep Black Market attacks from being too straightforward, Offworld has a clever mind game in play by allowing you to buy protection for any building. Do you risk hitting the most obvious target, such as a geothermal power plant, even though it might be protected? At the same time, do you let your opponent assume you’ve protected a crucial building and save the cash for other uses? What’s more, the pool of available Black Market abilities changes from match to match, keeping the mind games fresh by preventing you from repeating the same strategy over and over.

Being stuck in a bad starting location is a huge disadvantage.

The opening moments of each match are spent exploring the shrouded map with scanning pulses, which creates a tense risk-reward system that dares you to lock yourself in before you have a complete picture of the resources in the surrounding terrain. It’s a clever idea, but if luck is against you you might find your game effectively over before it begins. It’s essentially random whether you’ll find a suitable location before others do, and being stuck in a bad one with little access to high-density resources is a huge disadvantage. When the shroud lifts after you found your base and you realize there’s no convenient source of water or other essential element nearby, you might as well concede before the fuel costs of transporting it across the map inevitably does you in. Conversely, waiting until you do have all the information means other corporations will probably grab the best spots and freeze you out of the sweetest resources. It’s caused some false starts for me. [Note: Mohawk points out it’s possible to disable this feature in the options]

You can never have too much.

You can compensate somewhat in your choice of which faction to play as, each of which uses a different combination of resources to upgrade their HQ and has a specific bonus, such as the Robotic corporation’s lack of need for life support. With the exception of the Science corporation’s ability to build factories directly on top of resource tiles instead of a mine, they don’t make dramatic differences, but they can offset a starting location that’s lacking in supply of one material or another.There’s a nearly constant, urgent, real-time land-grab going on

Once you’re established there’s a nearly constant, urgent, real-time land-grab going on as each company upgrades their HQ to support more hex claims and secure more resources and factories. The number of buildings you can have is limited, especially in the early game, so every choice feels crucial. Building positioning has to be considered, since adjacency is important for production bonuses but also makes you more vulnerable to certain Black Market attacks. And though you can bulldoze a building and plop down a new one in its place, you can’t give up your claim to that hex and grab a new one instead. Being locked in like this makes it difficult to pivot mid-game if your plans don’t work out and the markets you’re in are flooded.

EMPs can ruin your day.

The late game is all about maximizing return on your resources, which by now are coming in fast. On that note, I love how this is a game about buying out your competitors’ stock and turning them into subsidiaries, which means to lose in Offworld Trading Company is to literally get owned. On the other hand, most games are already decided by this point. Once the leading corporation turns their advantage into advanced structures like the Offworld Market, giving them access to a parallel market where formerly worthless resources might be far more valuable, they can pull away quickly. By the time you see the warning that a competitor has most of the money they need to buy you out, it’s tough to single-handedly stop them without coordinated help from other players concentrating their Black Market attacks. But because rounds typically last around 30 minutes, you won’t suffer a long, drawn out loss. And since Offworld is substantially faster than most economic games, it’s more multiplayer friendly.Having to unlock structures as mission rewards just makes the early games less interesting.

Alternatively, a single-player campaign exists as a variant on the skirmish rules with persistent upgrades from one match to the next, but I don’t feel it’s an improvement or especially worthwhile. Having to unlock structures as mission rewards just makes the early games less interesting than the skirmishes I started out with, and the altered win condition of being the one to dump the most money into upgrades for a shared colony within a set time limit only seems to drag out these missions longer than they need to go. If you stick to the skirmish and multiplayer, you won’t miss much – even the sardonic written dialogue of each of the four factions’ mascot characters is limited to the tutorial.Though it lacks character in its story, Offworld does have terrific industrial-sounding music that hasn’t gotten old over dozens of games. And while it’s graphically plain for the most part, there’s a good variety of terrain types to pick from to at least make each game look different, even if they’re not massively different in gameplay style.

Relatively simple in concept but complex in the possible manipulation of the market, Offworld Trading Company manages to make a type of gameplay that’s traditionally slow into something fast and exciting. It’s a tad too easy to trip yourself up before you even begin, but once it gets rolling this multiplayer-friendly cold war of capitalism forces tough, rapid-fire strategic choices.

StarCraft II: Legacy of the Void (for PC) Review

Is Ardennes Assault worth it? :: Company of Heroes 2 General Discussions