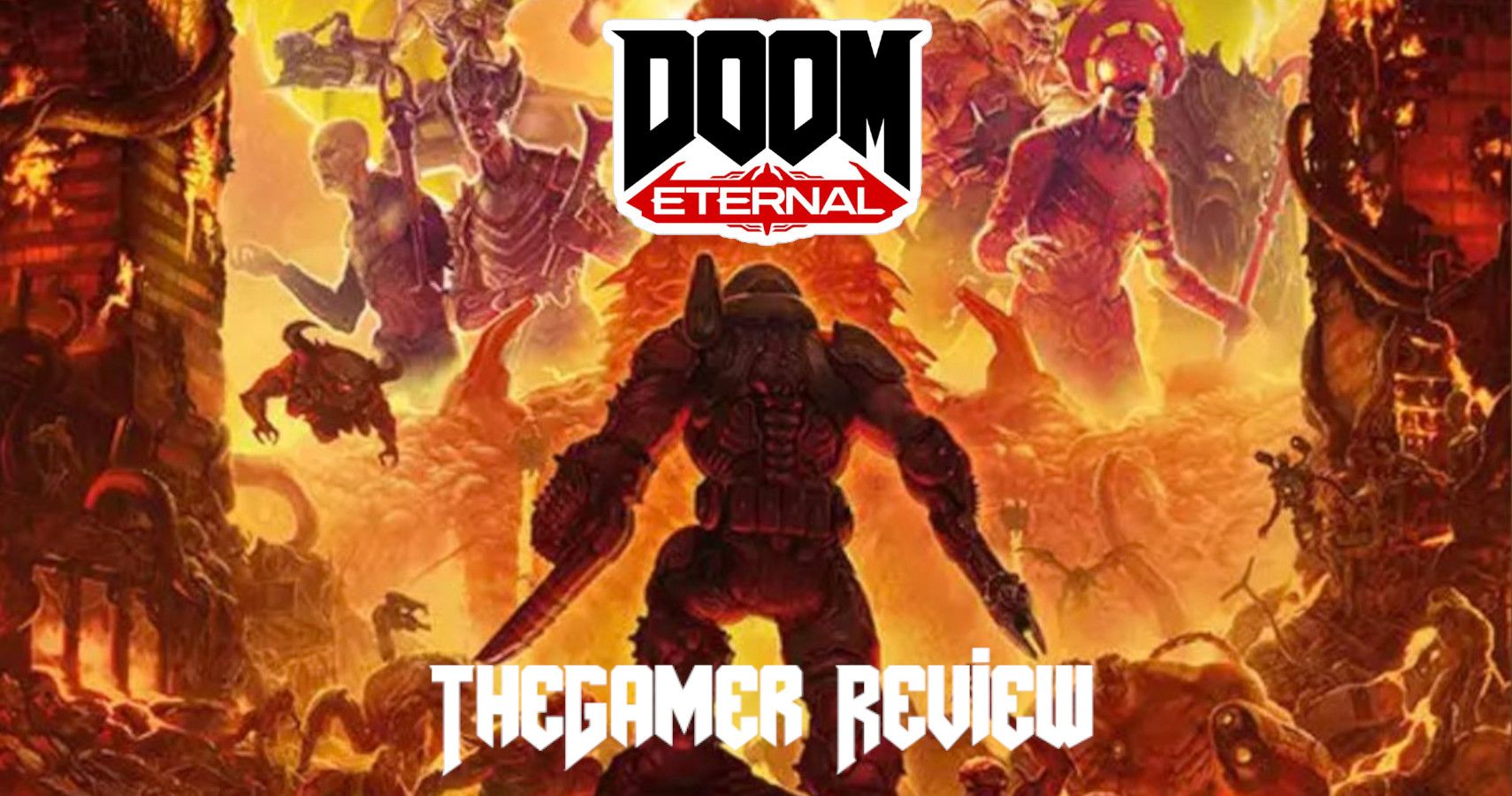 RELATED: DOOM Eternal: How To Get The Classic Doomguy Skin

The Right Tool For The Job

If you just replayed DOOM (2016) as a refresher, or if you remember the high energy gorefest that made that game so special at the time, you may find yourself struggling at the start of DOOM Eternal. The enemies are much smarter and use tactics to surround and corner you, there’s precious little ammo to go around, and your basic melee attack doesn’t actually do any damage. These changes may seem overly punishing early on, but through trial and error, it doesn’t take long to understand what the game wants from you.

Continue scrolling to keep reading Click the button below to start this article in quick view. advertising

In DOOM Eternal, your weapons and equipment aren’t just damage dealers, they’re tools. It’s essential that you use the right tool for the job. This is reinforced each time a new demon is introduced and the game pauses to show you their weak points. Fighting an arachnatron? Use the Heavy Cannon’s Precision Bolt to snipe the gun off their heads and disable them. Fighting a pinky? Double dash over their heads and attack their tail. Every weapon, equipment, and ability is a tool for a very specific job. Ammo is limited to reinforce the need to use weapons effectively. The game doesn’t really care what your favorite gun is, to succeed in DOOM Eternal on ANY difficulty, you need to play smart and use the right tool.

RELATED: DOOM: Eternal – How To Perform Glory Kills & Finish Off Your Foes

Your armor, health, and ammo are all resources to manage. Glory kills are back and better than ever, earning you some health with brutal finishing moves. The chainsaw instantly kills enemies and generates a ton of ammo, but chainsaw ammo itself is sparse. One chainsaw ammo will regenerate over time, which is enough to kill any of the shambling zombies or low-tier demons like zombies and imps. The new shoulder-mounted flame thrower causes enemies to drop armor when they get shot while on fire. These three abilities – glory kills, chainsaw, and flamethrower – are about more than dealing damage. Similarly, glory kills charge your Blood Punch, which is the only way to do melee damage. Resource management is core to the DOOM Eternal and the experience is that much richer for it.

Progression Is All About Learning To Fight Better

There are a dizzying number of ways to upgrade as you progress through the game and collect secrets hidden throughout the world. Each weapon has two mods to unlock with two upgrades each, and a mastery ability that is unlocked through a challenge (i.e. kill 30 Gargoyles with Micro Missiles). Your suit has 20 passive upgrades unlocked with Preater Suit Tokens, as well as Sentinal Crystal upgrades that increase health, armor, and ammo capacity, as well as providing further upgrades when unlocked in pairs. Finally, three slots are available for any runes you’ve unlocked.

All these systems can seem overwhelming, and you may find yourself lost in the menus looking for ways to spend your points and tokens early on, but there’s a brilliance to the way progression is handled. It’s not about playstyle. You aren’t leveling up “your” Doomslayer or creating a build. Rather, the abilities you choose to unlock shape the way you learn how to engage enemies on the battlefield. By the “point of no return” (about three-quarters of the way into the game), you’ll most likely have all of the mods and most of the weapon and suit upgrades unlocked. The order in which you unlock them simply dictates the way you incorporate new strategies and tools in battle. The mods that make the most sense to you will be the first ones to unlock. They’re spread out enough that by the time you’re comfortable with what you have, you’re ready to learn a new one. Again, it’s more than just different ways to deal damage, everything has its use.

DOOM (2016) iconically begins with the Doom Slayer slapping away a monitor as Samuel Hayden attempts to deliver some expositional dialogue. It sets a pace for the game that tells players, “There’s a story here, but don’t worry about it. Go rip and tear, bud.”

RELATED: DOOM Eternal – How To Break Through Walls

DOOM Eternal delivers all of the context through collectible codex entries, similar to DOOM (2016), but this time the story isn’t something happening in the background. DOOM Eternal takes the Doom Slayer to half a dozen different planets and dimensions on a tour through the history of Hell, the Sentinals (a futurist race of space Vikings), and the Doomguy himself. The narrative of DOOM Eternal is considerably ambitious. It answers more questions than anyone ever thought to ask about the world and the slayer and offers genuine gothic sci-fi lore, rather than simple plot contrivances to move you from one arena to the next.

The result is a dozen levels that span an incredibly diverse range of locations that eclipse everything you can see in DOOM (2016) in just the first couple hours. Double jump, dash, and wall climbing create the opportunity for platforming puzzles and sprawling worlds that the developers have maximized to their full potential.

Rip & Tear, But This Time Use Your Brain

Failure is part of mastery, and by the end of my ~20-hour playthrough of DOOM Eternal, I felt like I had developed a far greater mastery of the game than I ever did in DOOM (2016). Some battles took me 20 tries or more, it’s true, but by the time I got through it I learned the timing of every wave and used every single one of my abilities to survive. For that, DOOM Eternal is likely the most satisfying shooter ever made. The easy mode (I’m Too Young To Die) is still available for anyone who prefers the mindless carnage of DOOM (2016), but I promise you, DOOM Eternal is worth the struggle.

A PC copy of DOOM Eternal was provided to TheGamer for this review. DOOM Eternal is available now on PC, PS4, Xbox One, and Stadia.

READ NEXT: When Will DOOM: Eternal Be Available On Xbox Game Pass?

Breath Of The Wild Roasts You For Roasting Radishes

Eric Switzer is the Livestream News Editor for TheGamer as well as the lead for VR and Tech. He has written about comics and film for Bloody Disgusting and VFXwire. He is a graduate of University of Missouri – Columbia and Vancouver Film School. Eric loves board games, fan conventions, new technology, and his sweet sweet kitties Bruce and Babs. Favorite games include Destiny 2, Kingdom Hearts, Super Metroid, and Prey…but mostly Prey. His favorite Pokémon is Umbreon.

Read Next in gaming

Superhot: Mind Control Delete is a bizarre, relentless take on the series’ themes