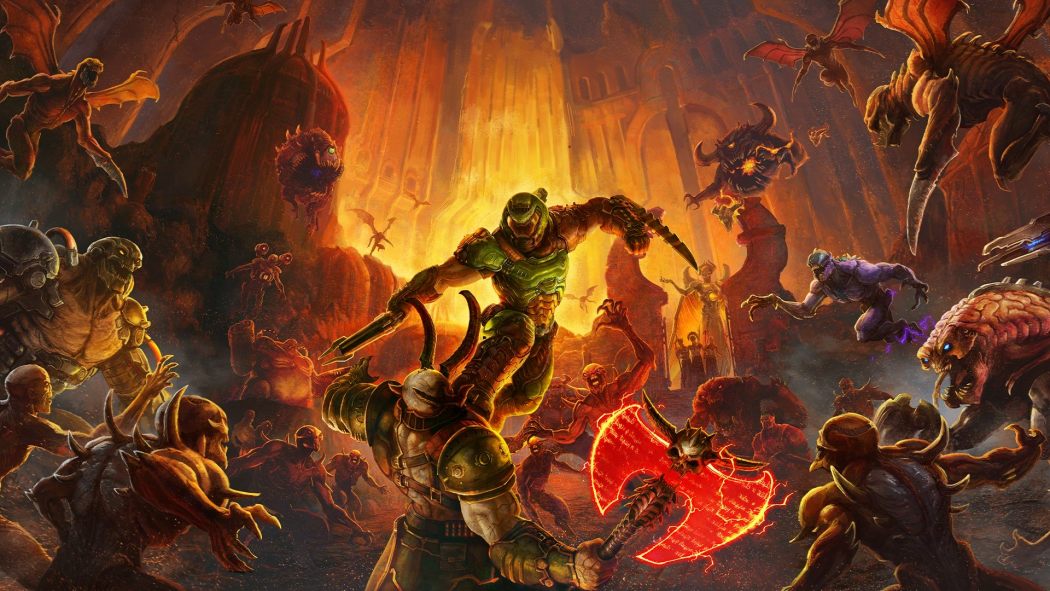 Life sucks right now. We’re looking down the barrel of multiple apocalypses, driven by disease, economics, climate change, or if you’re a parent, the early home release of Frozen 2. It is only fitting, then, to escape into an endtimes scenario even more cartoonishly bleak than real life. In fact, I would encourage it: play Doom Eternal. It’s fantastic.

If you’ve played the 2016 reboot of Doom, Eternal is essentially that game, but bigger, better, and more ridiculous. Hell reigns on Earth, billions of people have died, and demons keep showing up where they’re least wanted. However, you – the Doom Slayer – have a unique ability to banish demons, thanks to arcane prophecy and a simple innate gift for ripping and tearing. Doomguy’s legend is absolutely ridiculous at this point. Id Software has done nothing to shy away from that, and that’s for the best. There’s a lot more plot than last time – involving ancient aliens, alternate realms, and some delightful blasts from the past – but ultimately, Doom Eternal is about massacring your way through monsters and demons, and holy balls, is it a lot of fun.

Like its predecessor, Doom Eternal’s combat centres around tightly-honed gameplay loops, but they’re now more numerous and intertwined. Need health? Perform a custom-animated Glory Kill on a demon and it will flow like nectar. Need ammo? Chainsaw an enemy open and it’ll pop out like a pinata. Armour? Fire your flamethrower and it will somehow moult off enemies’ bodies as they burn. You just want a tiny reprieve in the action? Fire an ice grenade and stop enemies in their tracks for a few seconds. It takes some getting used to – play this game cautiously, and you’re dead – but before long, you’ll get into a rhythm of charging into the fray that rarely sees you running out of resources. The times in which you do run out end up all the more exciting for it. It’s exhilarating.

There’s also a lot more emphasis on using the right tools for the job this time around. Each of the visually and mechanically well-designed enemies has some weakness or other, each exploitable using one or more specific items in your inventory, be they abilities, weapons, or mods. Some have weak spots vulnerable to precision shots; some brandish shields that explode when shot with a plasma weapon; some will swallow grenades and suffer amusingly-animated internal explosions. More than any other shooter, Doom Eternal will have you using your entire arsenal almost perfectly evenly. It’s remarkably effective game design, and makes each combat encounter feel like a high-speed puzzle of bullets and explosions.

The arsenal that serves as your toolkit is, as you’d hope from a Doom title, pretty damned spectacular. Each of the game’s weapons (bar the ubiquitous BFG-9000) has a couple different mods that can be added and upgraded, most of which actually make their hosts perform like completely different weapons. Hold down the mod trigger and the heavy machine gun turns into a sniper rifle; the combat shotgun becomes a grenade launcher; the chaingun spawns a combat shield; and most thrillingly, the super shotgun fires out a fucking grappling hook that can pull you towards an enemy from across the battlefield. Even the inevitable upgrade trees feel like meaningful changes, whether in the form of equippable runes, suit abilities, additional weapon behaviours, or chunky stat bumps. And just as importantly, everything from the gunplay to the glory-kill animations to simply interacting with switches has a really satisfying tactile weight to it.

Refreshingly, Id has taken the opportunity to add more level-design variety than was seen in the 2016 reboot. Where that game was essentially made up of arena fights joined by corridors, Eternal is paced out with a bunch of ideas that shouldn’t work in a fast-paced shooter like this, yet mostly do. There’s a hub world where you can upgrade your gear, practice your skills, and admire the many, many collectibles and secrets you find throughout the game. A number of levels revolve around puzzles moderately more complex than Doom’s usual “find a key, open the door” fare. Most surprising and thrilling of all, there are a number of platforming sections – sprawling at times – that feel straight out of a fucking Mario game, and even the arenas themselves encourage you to build that sense of 3D movement into your combat rhythm.

The improved level design is matched by art direction, sound, animation, and music that complement the action perfectly. Adding to the utterly disgusting Hell-pocalypse art style you’d come to expect are a brand-new set of verdant, celestial, high-tech, and even icy environments, all of them exploring different flavours of the game’s brutal aesthetic. You’ll see more primary colours than you’d expect from a shooter in 2020, and many of the demon animations (the Pain Elemental in particular) are full of unexpectedly goofy personality. And the music – oh, the music – blends heavy metal with apocalyptic choirs, punchy synths, and an almost dubstep-like sense of rise and fall, to create dread, excitement, and a feeling of total badassery.

Not everything works. Some of the jumping and shooting puzzles are unclear, with goals positioned in such a way that intermediate steps seem missing. One enemy type in particular, appearing as a mid-game miniboss then later as a regular enemy, is an absolute nightmare – constantly spamming undodgeable attacks, moving so fast it’s impossible to track, spawning similarly irritating sidekick enemies, and making itself utterly invulnerable except for split-second openings. Playing long sessions can get overwhelmingly punishing on the brain, and though this title takes a more forgiving approach to the series’ winking toughness fetishism, the second half of the game sees a massive jump in difficulty regardless of what setting you’re playing on.

For the most part, though, Doom Eternal is an extraordinarily fun time. It’s aggressively gory, but not even once remotely scary. Its macho violence is so ridiculously over the top that it plays like a cartoon of a heavy metal album cover, every bit as rancid and hilarious as an episode of Metalocalypse. You won’t find any emotional epiphanies here, but it’s fucking Doom, after all – all you should really expect or want is a fast-paced, rip-roaring tour through the worst Hell has to offer. Eternal is that, though communicated through deceptively clever game design. Whether you stop after the suitably huge finale, or continue on into the gleefully sadistic 2-v-1 multiplayer mode and utterly insane remixed “master levels,” you’ll get exactly what you came for: a potted apocalypse, polished and honed to a beautiful, gleaming, completely repulsive finish.

How do you quit a game?

StarCraft II: Legacy of the Void: The Kotaku Review