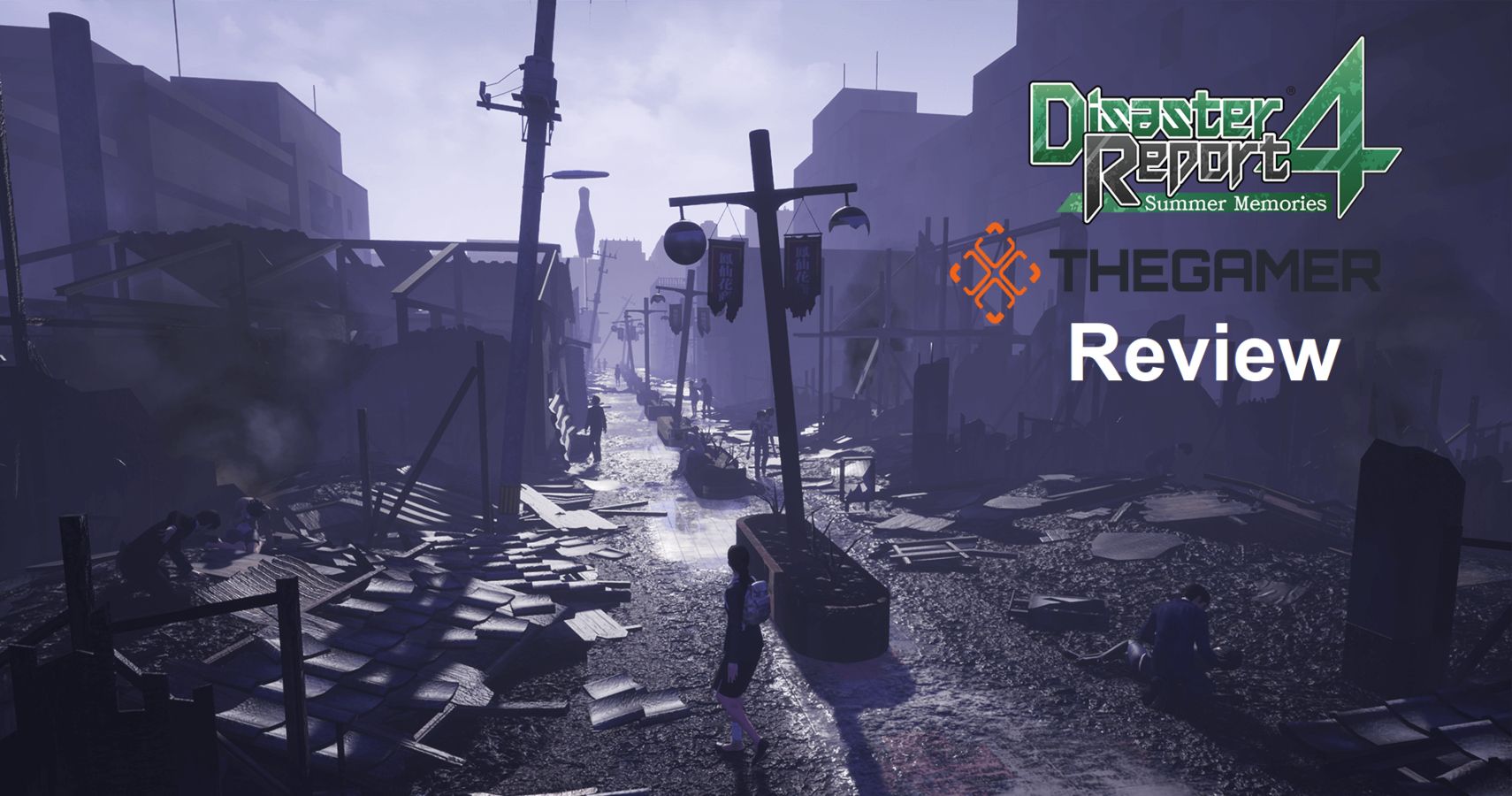 Almost a decade later, the game is finally here – and on Western shores, no less. Was it worth the wait, or is the game itself a complete disaster?

Please note that Disaster Report 4: Summer Memories features a very ugly handling of sexual assault in the early game. I’ve detailed the scene here, so readers can know what they’re getting into ahead of time.

Talk about your unfortunate timing. Disaster Report 4: Summer Memories was scheduled to be a PlayStation 3 game, way back in 2011. Unfortunately, its release date was one day before the tragic Tohoku earthquake and tsunami. After an initial delay, the earthquake’s impact on Japan’s collective psyche proved too strong, and the game was formally cancelled.

Almost a decade later, the game is finally here – and on Western shores, no less. But was it worth the wait, or is the game itself a complete disaster?

A Part To Play

What’s most striking about Summer Memories is just how human it feels. From the outset, players are given a simple set-up. Your protagonist is just a normal lad or lass taking public transit into the city, when suddenly, a massive earthquake ravages the entire country. Society begins to break down in a matter of hours, and soon, your character is left struggling to make sense of it all as they find new enemies and allies in the ruins of metropolitan Japan.

In the wake of the disaster, you’re tasked with determining what kind of character your protagonist is. Are they a ne’er-do-well opportunist who wants to watch the world burn? Are they an earnest salary worker, just looking for a way to provide for their family in the face of tragedy? Through organic dialogue trees, that’s a choice that you get to make. In that sense, it’s a true role-playing game, insofar as it gives you all the tools you need to really determine your character’s moral compass.

It’s important to really think about this as you’re playing, too, because Summer Memories is a game that’s built entirely around talking. Everything your character says, does, and thinks factors into how the story unfurls. You’ll find that it’s just as easy to accidentally stumble upon sprawling narrative threads as it is to completely miss chances to discover new aspects of the world, purely based on what you say and do.

Because, really, you’re never a hero. The world happens around you, not because of you. You’re just a normal person caught in a nightmare scenario. Summer Memories does a better job at driving this home than most games.

A Walking (And Talking) Simulator

When I say that this is a game built entirely around talking, I mean it. I mean it because there really isn’t that much to do, on a mechanical level. There’s light inventory management, sure, and there are definitely some stealth sequences. But Summer Memories shares its DNA not with contemporary action or survival games, but with the point and click adventure games of yesteryear.

This is, perhaps, where the game could prove to be divisive. Because Summer Memories is built so heavily around walking and talking, the developers expect you to really dive into those things. That means that you’re given little to no direction, and are generally left to stumble around until you click on the right thing. A lot of the time, I found myself walking in circles until I figured out the obtuse sequence of events I needed to trigger.

Some may see this as a knock against the game, but from where I stand, this is a courageous move on Granzella’s part. They’re fully committed to forcing players to grapple with their own intelligence and sense of exploration. How would you react during a natural disaster? Who would you talk to? What would you prioritize? By giving you this space to breathe while digging deeper into the world, Summer Memories aids your immersion into their densely populated and ornately dilapidated world.

I was able to play my protagonist as a wannabe businesswoman with a sick cowboy hat, who roams around the city, helps people in need, and flirts with any lady she comes across. The thing is, there are enough clothing options, dialogue choices, and side-quests that I could’ve chosen all differently. Summer Memories is less preoccupied with giving you a set character, and much more interested in what you do with the numerous opportunities it presents to you.

In this sense, Granzella actually succeeds where studios like BioWare and Bethesda fail. In Mass Effect, for instance, you’re always Shepard. It doesn’t matter if you’re gay or straight or asexual. It doesn’t matter if you do a good or bad thing. Ultimately, you’re railroaded into being the biggest, most important special person in the galaxy – and that sucks! I much prefer Summer Memories’ approach to things, in that it felt like I was really organically building a character.

Get Down On It

This isn’t to say there aren’t mechanics to this game – they’re just so sparse that they don’t stick out. However, there is one primary interaction with the game world that you use frequently, and it’s kind of rough.

First up is crouching. Players are told to crouch when they feel a quake. If they don’t, a floor could give out or a building could collapse, and the impact of that could knock them off their feet and hurt them. It’s a neat idea, but it’s encumbered by just how clunky it feels to crouch in this thing. Your character meanders to their knees, then has to slowly transition into a crawl – which itself doesn’t feel good. The rest of the game’s controls are pretty solid across the board, which makes how bad it feels to brace for impact and crawl around really stand out.

Luckily, you generally aren’t tasked with crawling around too much, and most of the time, walking and running are your primary mechanics. You’ll carefully stroll under fallen structures, and sprint away from buildings that crumble organically and in real time. It all feels very tangible and immersive – Summer Memories does a wonderful job selling you on setting.

There are rough parts to Summer Memories, to be sure. Its visuals aren’t the prettiest, its translation is awkward in places, and that crouching mechanic really does suck. Yet the experience of this game, the raw, primal thrill of being swept up in a whirlwind of danger and given the choice to either work with people or piss them off is unlike anything else on the market. It’s a game that lives and dies on its interactions with the world and its inhabitants alone, and those interactions alone are worth the price of admission.

For people who like stuff like Shenmue or Deadly Premonition, or who just want to be a flirtatious cowgirl lesbian in the face of a cataclysmic natural disaster, you could do a lot worse than Disaster Report 4: Summer Memories.

Next: Final Fantasy VII Remake Review: The Train Came Back

Bella Blondeau is a lovable miscreant with a heart of gold… or so she says. She likes long walks in dingy arcades, loves horror good and bad, and has a passion for anime girls of any and all varieties. Her favorite game is Nier: Automata, because she loves both robots and being sad.

Read Next in gaming