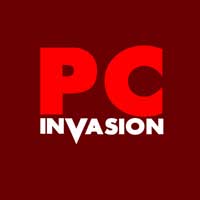 Here’s a quick clarification so Company of Heroes 2 players can determine their level of interest in Ardennes Assault: there’s no multiplayer stuff. You don’t get to use the Ardennes commanders in multiplayer (at least, you couldn’t in the press build I was reviewing) and there aren’t any extra maps. No co-op options either. Relic’s new, stand-alone campaign really is single player only.

This seems like a bit of a gamble, especially as Ardennes Assault is going for $40.00 USD; pretty much the price of a full game. You can indeed buy it as a stand-alone title without the need to own Company of Heroes 2, but the exclusive single player focus and relatively high cost puts it in a bit of specific interest bracket. 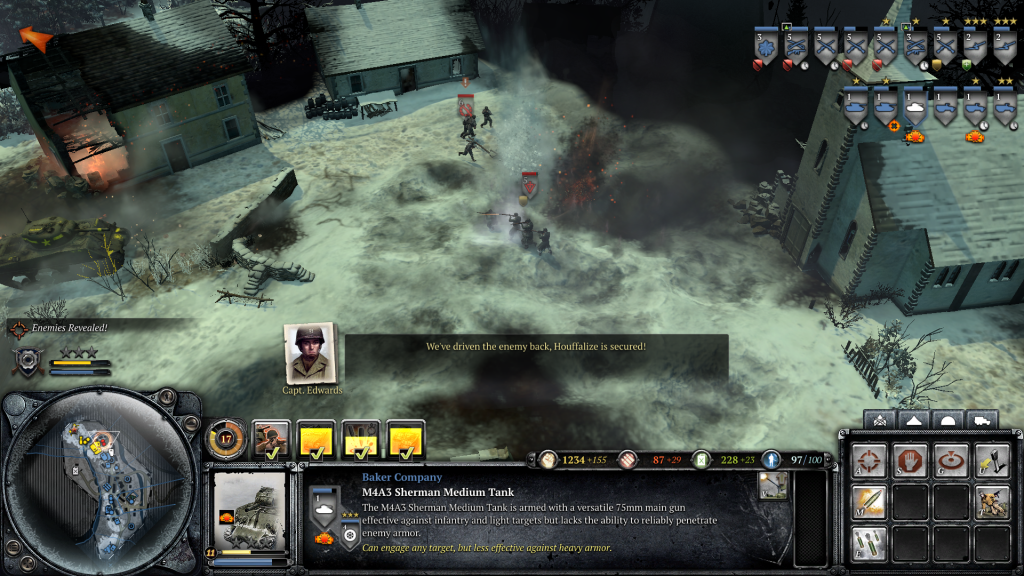 The town is saved! And only partially destroyed in the process. Hurrah.

Ardennes’ existence as a stand-alone purchase also presents an obstacle in how much prior knowledge Relic can assume of the player. The campaign’s playable US Forces have previously been introduced through multiplayer DLC, but not everyone will have played this. Ardennes Assault effectively has to cater to three tiers of people: those who’ve played everything up to now, those who aren’t familiar with the US troops, and those for whom this expansion is their first Company of Heroes 2 experience.

Since that’s basically an impossible balancing act, it’s not really a surprise that Ardennes Assault doesn’t handle it all that well. You’re given a tutorial mission, which teaches a few tricks and commander abilities from each of Ardennes Assault’s three playable companies (support, paratrooper and mechanised,) but neglects to explain a whole lot of others. It’s a bit like somebody teaching chess by explaining how the Bishops and Pawns move, then shrugging and assuming you’re good to go.

Someone coming fresh to this expansion is going to have no idea about unlocking different strands of units by recruiting the Lieutenant, Captain and Major figures. Nor subtleties like the Major being able to act as a retreat point for troops. Sure, they’ll learn some of this on-the-fly as they play, through tooltips and experimentation, but Ardennes Assault isn’t particularly forgiving of learning through failure. 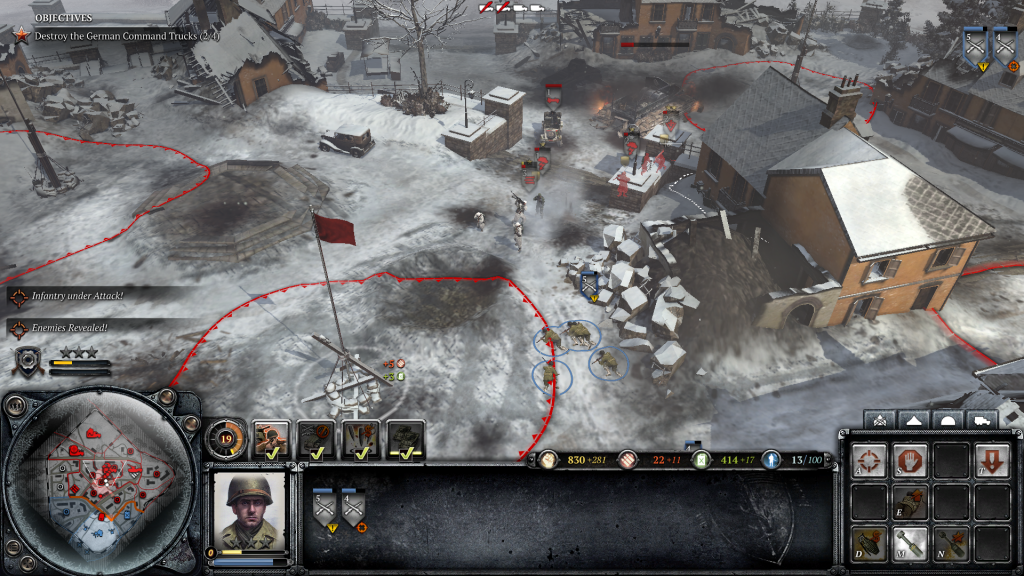 HOT COH2 TIP: Don’t be in this situation.

The reason? Ardennes Assault is an Iron Man campaign with one rolling save. Any screw-ups you make cannot be undone. Not that this is a problem in itself. Games like XCOM are great to play in Iron Man mode. But I had to double and triple check that this was the only way of playing Ardennes. Far as I can tell, it is. It’s possible to save mid-mission and pick up from where you left off, but you’re still limited to a single save.

Just as in XCOM, this means you can reach a point in Ardennes Assault where you simply have no chance of progressing and may as well restart. As a result of that I haven’t seen every single mission this expansion has to offer, because I’ve not yet made it through the full thing. My first efforts floundered around two-thirds in and the rest of my review time has been spent replaying earlier missions to see whether Relic’s claims about dynamic structure hold water. It was refreshing to be able to screw up like that, but this expansion is also pretty heavy-handed in the way it applies attrition to your forces.

Missions can be attempted multiple times, but each of your three companies has limited strength and this depletes as you undertake military actions. Even a successful mission where you’re diligent about healing up wounded squads and lose relatively few troops will cost you a fair bit of strength. Hell, moving through enemy territory on the strategy map (which you’re often forced to do in order to engage somebody) will cost you some. Combined with the Iron Man lock, this makes Ardennes Assault particularly tricky. 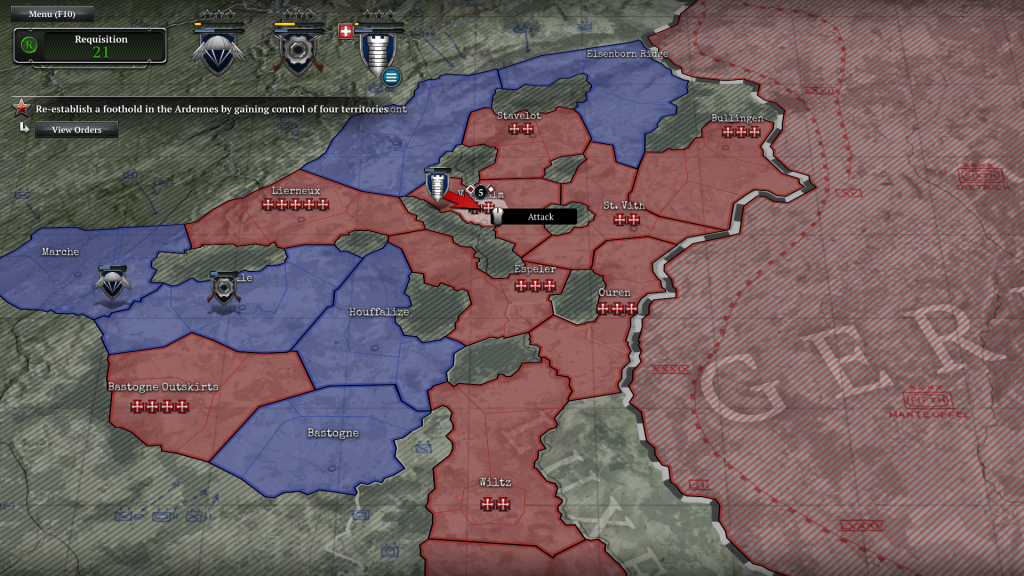 Well, at least Bastogne is nicely cut off here.

If company strength reaches zero, it’s no longer usable on the map. There are (in theory) a couple of ways to regain strength. You can either spend some of the same resource that’s used for levelling up commander abilities, allowing you get back in the game for a bit but ultimately leaving you weak in the long run, or you can ‘rest’ while other companies are doing missions. That latter method seems to only return a paltry 5 points of strength. The same amount you can lose by just making a forced move into enemy lines, and the same amount gained by spending ten of your precious requisition points.

The other strand of levelling up in Ardennes Assault seems slightly out of whack too. Finishing a mission with troops who’ve gained veterancy will increasing a company’s overall veteran points. Levelling this up through a three star system will allow the company to take the field with more/better troops. Again, in theory. Even in missions where I’d done extremely well, the veteran points topped out at about 35. It takes 100 to reach the first star level, and 300 to max it out.

That means to reach the third star level you’d have to use the same company, flawlessly, for about ten of Ardennes’ 18 missions. Oh, and never resupply their company strength because that deducts some veteran points (sensibly, as you’re bringing in fresh recruits.) Reaching even that first star requires a level of troop micro-management that’ll be far beyond the capabilities of a newer player.

The intent behind these systems is positive: the strength system represents the way the lengthy war is constantly whittling your soldiers away, while the veterancy one rewards careful play and the protection of valuable troops during a mission. But the resource allocation feels extremely stingy, beyond the point of forcing players into a potentially interesting allocation dilemma. 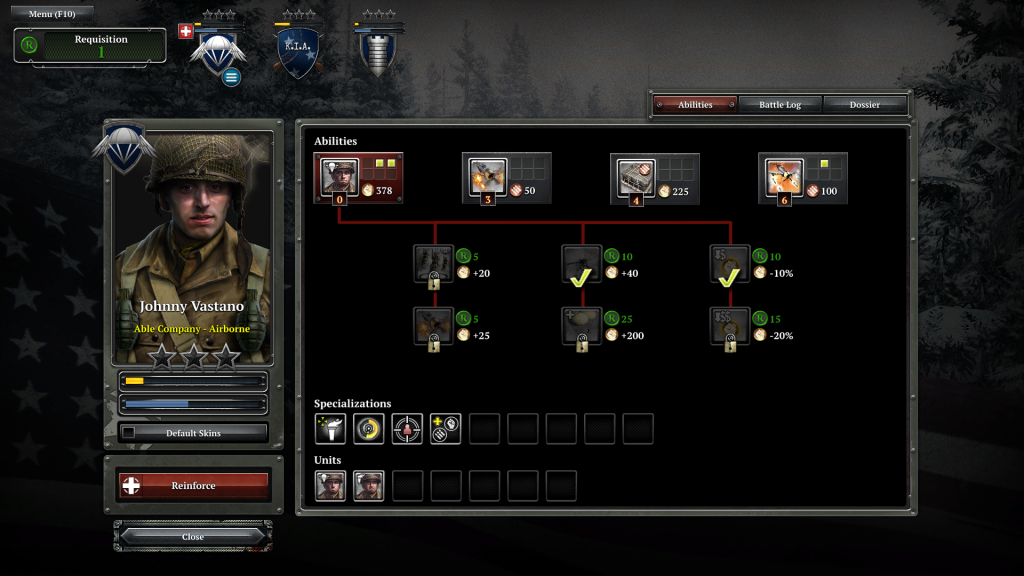 That’s a bit unfortunate, because the attempt to present a Company of Heroes 2 single player campaign in a more interesting, non-linear, fashion is otherwise somewhat successful. The strategic map is a far cry from being Total War or Crusader Kings, but it (combined with the three distinct companies) does provide varying avenues down which to tackle the campaign missions.

Once you’re beyond the initial set of stages introducing each company (which can’t be skipped; annoying for repeat plays) and let loose on the whole map, it’s up to you which territories you attempt to liberate from German clutches. Certain territories (eleven of them) have set missions whose major objectives will play out the same each time. Anything from actively hunting down German command trucks to creating a defensive corridor through which to evacuate the wounded. These missions will also pop up a random sub-objective, such as destroying a crippled enemy tank or retrieving intel.

The side-missions are often out of the way and potentially costly in terms of manpower, but tend to be worth doing for the experience bonuses they can bring (indeed, this is pretty much the only way you’ll get a substantial amount of veterancy points out of a stage.)

The other eight territories are randomised “engagements,” which are presented somewhat like skirmish maps with customised objectives. As well as the usual Company of Heroes 2 push to keep hold of fuel, ammo and victory points, engagements give you additional tasks such as killing enemies specifically with vehicles, or grabbing enough air-dropped supplies to keep yourself in the fight. 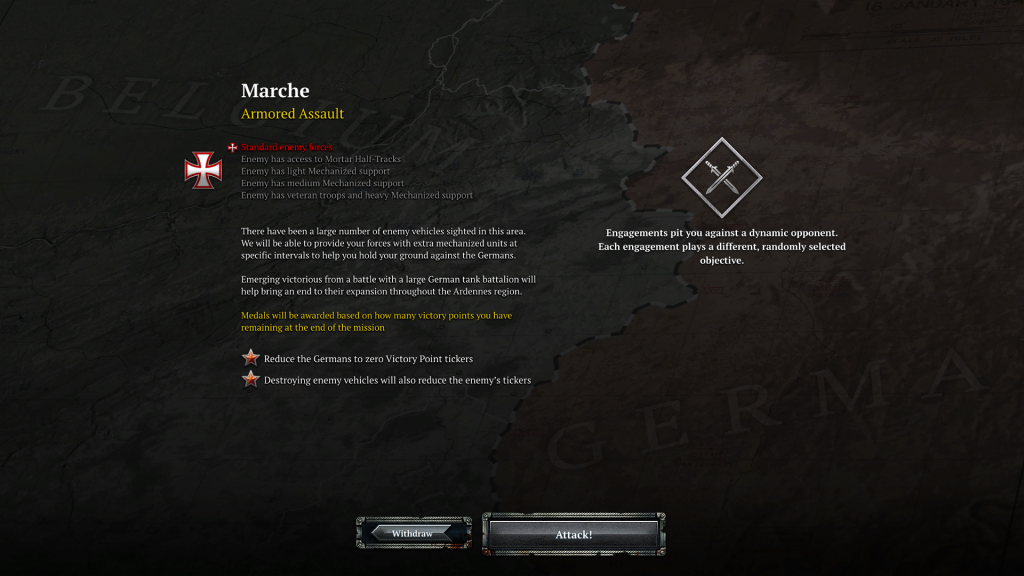 Here’s one of those engagements. Click for a larger version so you can read it and stuff.

Beyond selecting which territory to move into next, there isn’t a vast amount of long-game strategy to the Ardennes Assault map. The main thing you can do is attempt to cut off and surround German forces, preventing them from scattering and reinforcing other territories after you move in. Each area has an Iron Cross indicator, depicting how strong the Germans are and what sort of units they can field. It’s impossible to absolutely prevent the bolstering of territories (you don’t have enough companies for that,) but you can at least cut a few troop movements off with a bit of forward planning.

The Germans don’t actually move troops of their own accord (aside from re-deploying when scattered,) which gives the strategic layer a bit of a weird, one-sided feeling. It makes the longer term Ardennes mission goals feel a bit lacklustre, because they never extend much beyond telling you to hoover up some territories. Your goals are literally “okay, recapture four areas … right, now recapture another six areas.” The player is the only one taking proper ‘turns,’ painting the territories blue in the most basic way.

Other than that, the map sometimes pops up some random events that’ll offer a reward for going after a certain territory within a limited time-frame. You might gain the ability for that company to unlock the Major building chain without cost (pretty damn handy,) or just gain a couple of extra units for that particular mission. 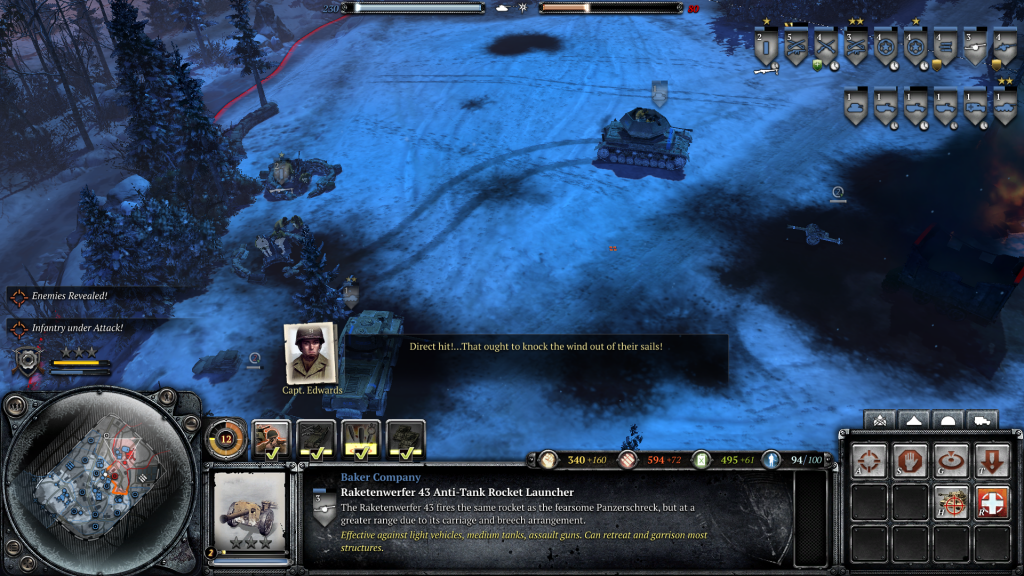 In attempting to add degrees of permanence, personality and consequence to your actions, Ardennes Assault presents this US Forces campaign in a more interesting (and not quite so historically tone-deaf) light than the original Soviet outing.

But Relic’s single player experiment is only partially successful in injecting a bit of dynamism into what would otherwise be a linear experience. The strategic map is too basic and static for any truly interesting long-term operations, and the supporting mechanics of strength, requisitions and veterancy don’t always seem to gel as they should. Opting for an Iron Man style save system is not unwelcome, but I found that it’s enforcement discouraged risk-taking and pushed me into a conservative, ultra-cautious style of play. Not one I particularly enjoy.

In this sense, Ardennes Assault is a rather hostile stand-alone expansion for newer players to take on. Company of Heroes 2 isn’t exactly welcoming at the best of times (you still can’t find a list of vital keyboard shortcuts through the in-game menus, which is pretty ridiculous,) and the amount of assumed prior knowledge here is pretty telling. One for veterans only, then; and those with a fairly healthy disposable income too.

The Last Of Us Part 2 Spoiler-Free Review