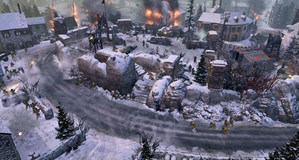 How had it come to this? It had all happened so quickly, too quickly, as bullets incessantly rained over the watchtower I now single-handedly defended. I could still hear the Captain’s relentless orders clear as day in my ears, as we’d set up our firing stations before this all kicked off: “The area of view is the wrong way! Get it pointed towards the treeline!” and “That’s not gonna do any damn good over there! We need a position between the trenches!” I was new to this. He knew that, we all knew that. And now the burgeoning German assault had us pinned back within an inch of defeat. It felt like just moments before that we’d arrived at Checkpoint Fox, set up camp, and built our defenses. It felt like moments before, because it was.

Company of Heroes 2: Ardennes Assault, the single-player focussed CoH main series RTS expansion is not one for holding hands. There’s no over elaborate tutorials, and you’re pretty much thrust into the trenches helmet-first with little to no training or warning from the outset. It’s a standalone expansion, meaning you need not own, or even have played Company of Heroes 2 up until this point. This somewhat justifies, or at least attempts to justify, the game’s £30 price point, however it’s immediately clear that developer Relic is banking on newbies being familiar with Ardennes Assault’s forerunners, thus knowing what they’re doing. 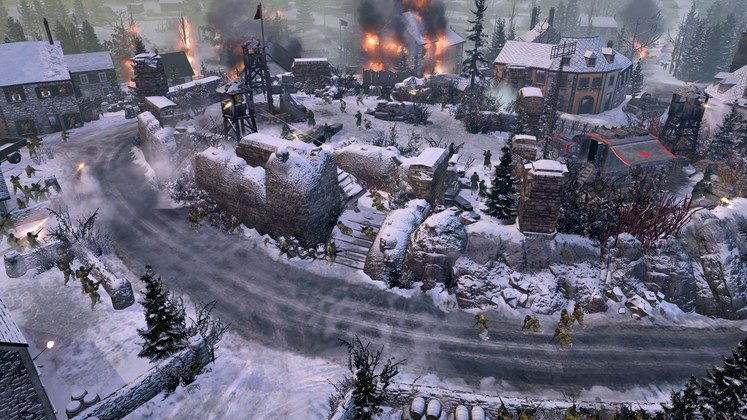 Flank you very much

I hadn’t played Company of Heroes 2, and hadn’t even played the original since probably around 2007. This was my biggest problem, as the above outlined scenario was merely the introductory level of a further 18 mission campaign; testament to the grueling war set forth from the game’s outset. Luckily it was a problem easily overcome.

Each battle is hard, and no matter how many successes my team accrued along the way, I never really feel like I was ‘winning’. At times I’d trounce the foe, charging forward, dominating my patch. Other times, I’d scrape by, hemmed in at the last garrison, before somehow pulling through. In essence, the rush supplied by victory was short lived because it was never too long before I was pinned back or once again hiding up a watchtower, scrambling in defense. I’ve never been to an actual war zone, but as far as digital interpretation goes, and certainly the intrinsic psychological factors I imagine must play a huge part in the experience – my time with Ardennes Assault felt real.

Against an unprecedented German counteroffensive, the name of the game in Ardennes Assault is to reclaim territory from the Eastern giant by calling upon the three companies at your disposal: Dog (support), Baker (mechanical), and Able (airborne). A range of skills can be applied and upgraded to any unit, and a combination of up-levelling tends to be the best approach, as you’d likely expect. I found veterancy to be the most fulfilling perk, meaning my soldiers got better at their jobs with experience, as opposed to upgrades. This felt like they’d better earned their skillset, and it felt satisfying from my god-like position to watch my squadron grow. Sadly, however, this meant losing a particular squad member after waves and waves of battle was particularly hard to take – again harking back to how well Relic portray the psychological factors associated with war.

Again, in opposition to holding the player’s hand, how Relic has designed the game’s map is quite ingenious. Flanking foes and strengthening defenses by infiltrating new or unused areas is made possible during most bouts, meaning meticulous strategy becomes a must. I found this to work on three different levels: one, as a relative newb, I was forced to work on my battle plans, considering all angles; two, I imagined veterans of the series would revel in such pinpoint strategy; and three, if you, as the player, don’t map the battlefield in such a way, the enemy sure as hell will! I found this out to my peril on several blood-spilling occasions. 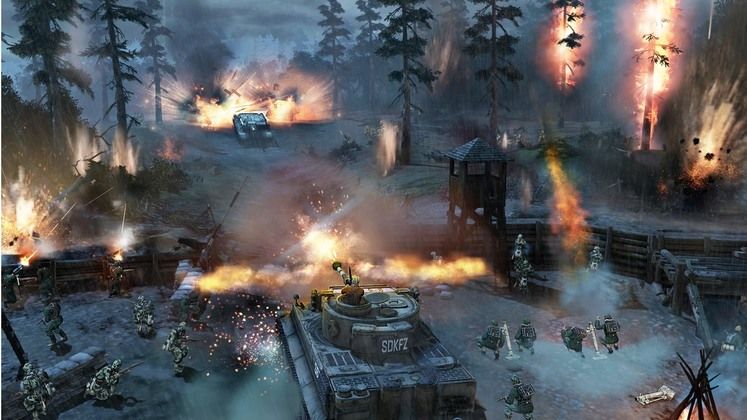 Tank you very much

Get any of this strategy wrong, and you’ll discover just how narrow the margins of success and failure really are in Ardennes Assault. As a far from experienced CoH player, I did find it all a little overwhelming at times. I did feel like telling the captain to fuck off on more than one occasion. And my squad. And the Germans. I raged quit a few times, but as I sat with my cup of tea in the back room, it wasn’t long before the war zone pulled me back in.

Perhaps one of the most unforgiving features of Ardennes Assault is its decision to omit a save and reload feature post failed missions. There’s the option to save and quit, but the game then enforces handicaps, such as reduced stamina. Fail too much and you’ll face a game over. I get why this option – or lack thereof – is there, as it ultimately raises the strategy stakes even higher, yet it does seem a little harsh, particularly for those fresh to the field.

But perhaps I’m being a bit of a sissy. After 18 missions of blood, blood, sweat, blood, and tears, I felt like I’d achieved something. I felt like someone should be presenting me with a medal. The war was won, but at the same time I couldn’t shake the feeling I could’ve done more for my squad. If I’d flanked left instead of right that one time, maybe half of my Dog team would still be with us, collecting their medals with me. Maybe the captain wasn’t such a bastard after all.

Now for the age-old question: is war worth it? At £30, Ardennes Assault might be slightly overpriced, yet within lies a brilliant war sim RTS. Only the best need apply.

The short-lived joy of winning.

StarCraft II: Legacy of the Void (for PC) Review