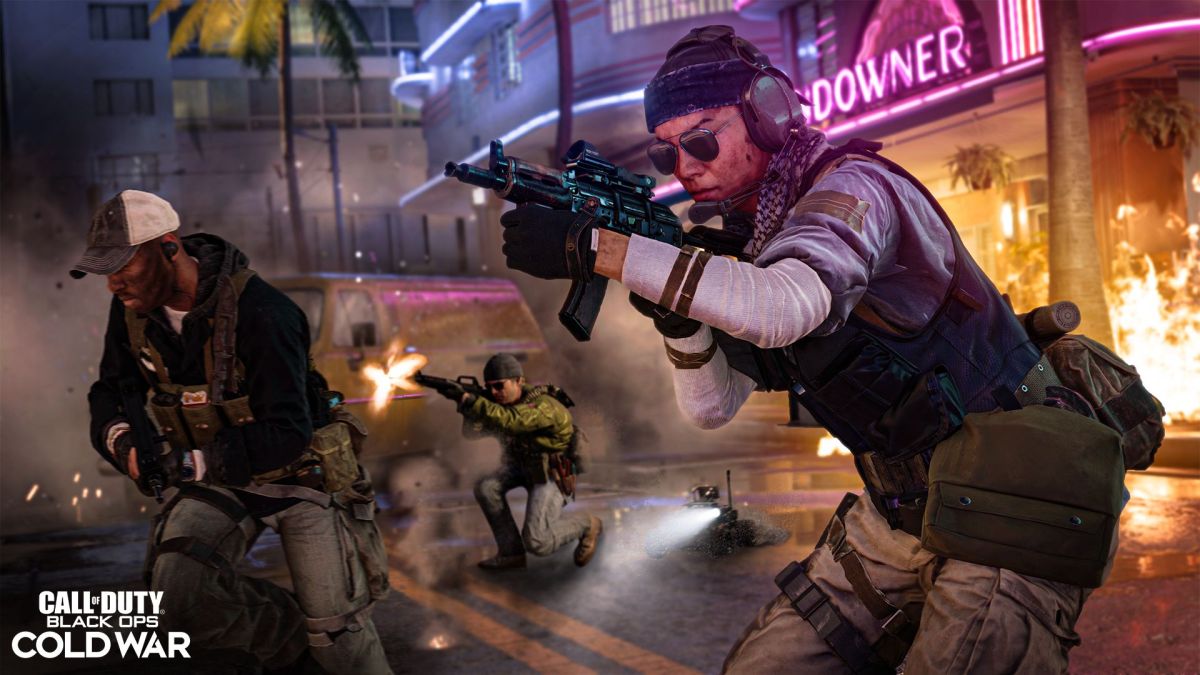 Black Ops Cold War doesn’t feel like a 2020 video game. In the year of PS5 and Xbox Series X, it’s a shame that what will undoubtedly be a big multiplayer experience this winter has launched with such a lack of content. There’s a total of just eight maps to explore, a very limited number of modes, and even the weapon arsenal is small with 27 guns in total, including all secondaries. The core gameplay will feel familiar from the get-go so there’s little room to complain about the moment-to-moment action, but it’s the overall content on offer from day one that gives cause for worry.

In fact, to compare it directly to Call of Duty games of old, the very first Black Ops from 2010 would be the closest relation. Matches feel similarly paced and a lot of the weapons seem like carbon copies – not to say that’s a bad thing. The MP5 has jumped forward ten years to once again become one of the best guns, decimating enemies from the hip.

Check out our Call of Duty Black Ops Cold War campaign review to read Alyssa’s thoughts on the single-player component.

At the time of writing, you’re faced with just eight multiplayer maps, plus two levels unique to Fireteam (more on that mode below). For reference, last year’s Modern Warfare launched with 19 maps, including those in Ground War and Gunfight. It may come as a surprise given Call of Duty’s lack of strong maps over the last few years, but most of the eight on offer are actually pretty good; only Satellite is explicitly dire to play. Which is a huge improvement from the slew of terrible, “what on earth were they thinking” maps last year. Treyarch typically designs well thought out maps with a lot of verticality – Checkmate, Garrison, and Moscow here are far better than any Modern Warfare maps – but with so few in the rotation, it becomes repetitive incredibly quickly.

There’s very little innovation when it comes to the modes on offer too. Of course, your Call of Duty staples are here; Team Deathmatch, Search & Destroy, Domination, Hardpoint… plus two new ones in the form of Control and VIP Escort, but where are all the gamemodes Modern Warfare trialed last year? Infected and Gunfight were both immensely popular, but don’t feature this time. Realism may not have fared as well as the others, but there’s nothing comparable this time, no outside-of-the-box thinking to keep the formula interesting.

Credit where credit’s due though, because Control is a great mode, and one that could easily become a mainstay for future Call of Duty games. The only problem is it’s not different enough – one team attacks two points on the map while the other team defends, and each team has a 30-life limit. If you can’t capture both points within your allotted lives or the timeframe, you’ve lost. It’s like Demolition, an old fan favorite mode, but instead of bomb sites you have Hardpoint-esque zones.

There are two other modes on offer, Fireteam and Combined Arms, both of which offer larger style matches, with 20+ players each. Fireteam pits 10 four-player squads against each other and offers up one of the few innovations seen in Black Ops Cold War, and it is so much better for it. It’s essentially a mini-Warzone match, but rather than fighting to be the last squad standing, you need to complete objectives. At the time of review, only the Dirty Bomb variant is available, which sees squads collect uranium and deposit it at sites to earn points. If you manage to plant and detonate a bomb, you get a huge points bonus.

Combined Arms, on the other hand,  is one of the least enjoyable experiences Call of Duty has ever offered. It’s essentially Ground War from last year, so 12v12 teams on bigger maps with vehicles, and it simply does not work. The maps are too open, so if your team is struggling, you’ll usually be picked off by snipers within a few seconds of spawning. If you start running or driving to the objective, you’ll be picked off by snipers. If you try to take out the people sniping… you’ll be killed by snipers. Can you see the trend? Call of Duty has always excelled best at smaller maps with fast paced gameplay and should really leave the large-scale conflicts to Battlefield.

These new modes go on for longer than the usual game and are absolute, pure chaos from start to finish. Trying to win a Dirty Bomb match as a solo player with no squad communication is nigh-on impossible, but when you’ve got three pals attacking the same bomb site and crowding round you to both protect and speed up the planting process, while grenades and gunfire rains down through the much-needed smoke for cover? It’s simultaneously strategic and hectic, especially when all 10 fireteams are fighting over one single bomb.

For a Call of Duty game to be enjoyable though, it needs to have balanced weapons. We’ve had plenty of overpowered guns throughout the history of the franchise (I’m looking at you, UMP-45 in Modern Warfare 2), and while the weapons in Black Ops Cold War will inevitably be continuously fine-tuned and altered over the course of the next 12 months, right now there are two guns utterly dominating the show online. The MP5 shreds and doesn’t have much recoil at all with the right attachments, while the Hauer 77 pump action shotgun is like a shotgun sniper with a guaranteed two-hit kill from almost any range.

Then there’s the Cruise Missile. Easily the best killstreak in the game, this version of the classic streak can now target four players at once thanks to three mini homing missiles you can fire before the main one slams into the ground. Airborne streaks as a whole are somewhat overpowered this year because their health has been increased significantly; no more shooting them down with standard weapons – it’s launchers only, or a new addition: a SAM turret. Rocking Cold Blooded, to avoid enemy targeting, is an absolute necessity as one of your perks if you hope to stay alive when the sky is teeming with death machines.

None of this stops the experience from being a great time though, because Black Ops Cold War multiplayer is still Call of Duty at the end of the day. The crisp and responsive shooting mechanics mean there is plenty of potential for highlight-worthy clips; something that every game in the series has, even if that particular title wasn’t a stand-out. Whether you like to quickscope enemies with bolt-action snipers or hold down a chokepoint with an LMG, once again you can do it all because every play style is not just plausible, but feels satisfying and rewarding to do.

Which brings us back around to the point I made earlier: Black Ops Cold War feels more like an iteration in the style of an older COD, by continuing the experience rather than expanding it. The basics are as refined as they’ve ever been and feel excellent to play, but by only polishing existing mechanics and adding little new in relation to recent games it feels like a great foundation, provided there are plenty of post-launch content drops. New maps, modes, and weapons are all required to warrant the £60/$70 price tag, even with the astoundingly short 4-5 hour campaign and singular zombies map. This is a back to basics Call of Duty – not necessarily in a bad way, but for every high point, there’s an equally significant drawback and the lack of content doesn’t quite cut it in 2020.

Played on PC with mouse & keyboard.

Fast & Furious Crossroads Review: One For The Family