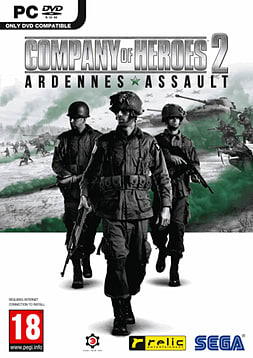 Company of Heroes 2: Ardennes Assault is a harrowing new chapter in the critically acclaimed series. Continuing the story in World War II, this exciting campaign places you in the heart of the battle, once described by Churchill as “…undoubtedly the greatest American battle of the War”. This pivotal conflict is known to many as ‘The Battle of the Bulge.’

Take charge of US Allied forces as they face tactical challenges and punishing terrain during a surprise offensive maneuver led by the relentless resurgent Oberkommando West. Watch the dramatic Battle of the Bulge unfold through the eyes of three different Officers; experience first-hand the unique struggles they encounter during the war, and how the weight of your actions will shape their future. The harsh reality of war is that no one is truly safe, and your Companies are not excluded from this ultimate truth. Bear witness to their heroism in the face of extreme odds, and fight to win control of the strategically critical Ardennes region.

NON-LINEAR CAMPAIGN: Take control of a strategic meta-map covering the key locations of the Battle of the Bulge. Choose the sequence to play the missions to ultimately defeat the mighty German Force and turn the tide of war.

18 ALL NEW SCENARIOS: Engage in a dynamic campaign across the Ardennes landscape consisting of 11 missions and 7 engagements inspired by the events of the Battle of the Bulge. The campaign progresses with dynamic bonus objectives that change on different playthroughs, giving more replay options than ever before.

3 ICONIC COMPANIES: Take command of the versatile Airborne unit, the relentless Mechanized Infantry and the heavy hitting Support unit and choose which one to deploy for each mission. Each Company is under the authority of 3 different Officers; each with their own distinct style, perspective and Abilities.

RESULTS THAT MATTER: Take care with your strategic decisions, as results and overall Company health persists between missions. Veterancy earned can help increase an entire Company’s effectiveness, while lost units are a hit to the Company’s overall health. Fail to manage resources well and you risk losing a Company for good. The decisions you make will ultimately shape the outcome of your battle!

CUSTOMIZATION: Customize each of your Companies’ 4 unique Abilities with up to 6 selectable upgrades. The unique skill tree offers 72 multiple levels of improvement allowing players to specialize their commanders throughout the course of the campaign.

This product is region locked and cannot be used in the following territories: